Yellowstone, The Bears of Caldera, by Chad-Michael Simon, earns the Literary Classics Seal of Approval 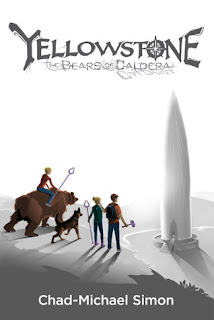 John and his not-so-identical twin sisters are fairly typical siblings.  They have a bit of a love-hate relationship.  Maybe a bit more hate than love to be fair, but there's love in there somewhere too.  John has been struggling with growing pains, the kind that come from being nearly a teenager.  And although he would never admit it, he still loves it when his mom reminds him he'll always be her baby.  With one foot in his childhood, and one precariously testing the waters of young adulthood, he teeters between both worlds with some trepidation.  So when John and his mom go "on a bear hunt," there are no real expectations of finding a bear.  But John does indeed find a bear, only this grizzly red beast can talk, and soon the boy finds himself separated from his mom in a land where bears and ants and other creatures can communicate with him telepathically.  John wants nothing more than to get back to the other side.  But soon, his sisters are whisked away as well and all three siblings find themselves in a land entirely unlike anything they've ever known.

Yellowstone, The Bears of Caldera, by Chad-Michael Simon, is a wildly imaginative tale of three siblings and their adventures on the other side of Yellowstone National Park in a hidden world shrouded in magic and mystery.  The three must learn who they can and cannot trust as they work towards a common goal of being reunited with their parents.  Yellowstone, The Bears of Caldera, is recommended for home and school libraries and has earned the Literary Classics Seal of Approval.