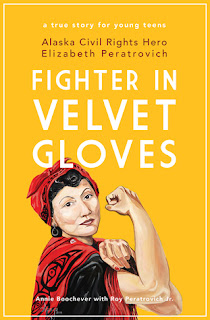 Elizabeth Peratrovich, a native Alaskan Tlinget woman, was a powerful force to be reckoned with. Back in 1945, many years before the U.S. government enacted the US Civil Rights Act of 1964, Elizabeth was determined to put an end to discrimination against Native Alaskan Indians. Never resorting to anger or bitter tactics, Elizabeth managed to rock boats and make waves, effectively influencing positive change. Determined to create a better future for her children, she traveled around Alaska in an effort to empower and educate natives. Then at 34 years of age, she delivered a powerful speech before the Alaskan Territory Legislature, effectively tipping the scales in a vote that would ultimately lead to the passage of Alaska's landmark Anti-Discrimination Act. Demonstrating grace and grit, coupled with determination and tenacity, this Alaskan trailblazer's story is one that will inspire and educate young readers. Recommended for home and school libraries, Fighter in Velvet Gloves has earned the Literary Classics Seal of Approval.
LITERARY CLASSICS Book Awards & Reviews International Book Awards • Top Honors Youth Book Awards • Seal of Approval http://www.clcawards.org
Posted by Author.Pub at 1:37 PM