Daydreaming Danny and the Pirate Treasure, by Joseph Ruder, earns the Literary Classics Seal of Approval 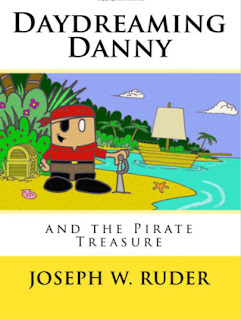 Danny is a precocious boy with a wildly vivid imagination.  When he 'discovers' a pirate map, he sets out on an exciting caper to find the hidden treasure.  Living in a typical suburban neighborhood, Danny finds creative ways to pursue the treasure, all the while maintaining a picture of the life of a true pirate in his mind's eye.  Fanciful illustrations help to depict Danny's world as it is, versus how he actually sees it.  This wonderfully clever children's picture book is one that will open up worlds of imagination for young readers who are sure to delight in this whimsical tale.  Recommended for home and school libraries, Daydreaming Danny and the Pirate Treasure, by Joseph Ruder, earns the Literary Classics Seal of Approval.