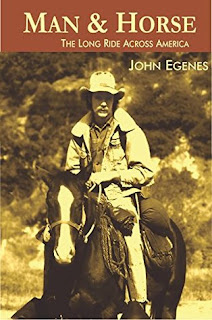 John Egenes was always a bit of a loner. He felt more at home hanging out in a stall with horses than he did with most people. Growing up in the 60s and 70s he was a musician before it was cool to be in a band and he would often hitch rides to neighboring towns, sometimes staying away for days at a time.  So it was probably no shock to those who knew him best when he decided to travel by horse from the West Coast all the way to the East Coast.  At a time when there were no cell phones, no GPS, and shamefully few reliable maps beyond those showing main roads and highways, Egenes set out, with a mere $100 in his pocket, to take on a grand adventure of epic proportions.

Man & Horse, The Long Ride Across America, is John Egenes' personal account of his experience traversing the United States on horseback.  Weathering storms, drought, and a myriad of other natural and unnatural threats, he and his trusty sidekick made their way through some of the harshest conditions imaginable.  His genuinely humble and introspective narrative makes for a fascinating and entirely enlightening read.  Recommended for home and school libraries, Man & Horse, The Long Ride Across America earns the Literary Classics Seal of Approval.

Email ThisBlogThis!Share to TwitterShare to FacebookShare to Pinterest
Labels: Best YA books for horse lovers, YA books about the outdoors, Young Adult books about horses