Premonitions, by Daniela I. Norris, earns the Literary Classics Seal of Approval 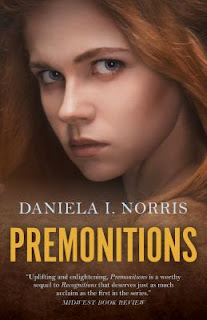 Premonitions, by Daniela I. Norris, is one book with three different story-lines. We follow the lives of Amelia, the wife of a Merchant's son, in twenty-first-century New York, Adele, who has married the wrong man, in eighteenth-century France, and a medicine man dwelling in a small village in West Africa during the fifteenth century. The stories of these three characters are all intertwined in one intriguing story that melds together in a lovely tapestry of life, love and loss. The second book in a series, this reads well as a stand-alone. A study of the complexities of life, riddled with karmic connections woven through different times and places, Premonitions is a compelling novella that will draw readers in from the first page to the very last. With the path clearly laid out for the next book in the Recognitions series, Premonitions will leave readers itching for the third book in this unique series.

Email ThisBlogThis!Share to TwitterShare to FacebookShare to Pinterest
Labels: Award-winning YA fiction, Fiction books about déjà vu, YA books about past lives, YA Fiction, Young Adult Fiction