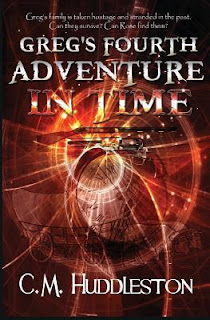 Greg's mom is worried about her son's safety and has grounded the boy from time travel. Greg is fairly certain that, while he may be safe from the Pirate, he will now die from boredom.  But soon after, the Pirate is seen in their time dimension and Greg's dad lifts the ban so the boy can help his father track down the elusive time-traveling bandit. But before long, it would appear the Pirate would instead find them; and Greg, his family, and their friends would all be forced to travel to the 1800s with no way to return to the present.

The stakes are high in this fast-paced thrilling adventure as Greg's friend Rose must find her friends who are struggling to survive in another time. History comes to life once again in C.M. Huddleston's Greg's Fourth Adventure in Time.  Huddleston continues to delight young readers with the fourth installment in the Adventures in Time Series.  Prepare to be enthralled by this highly entertaining and fascinating foray into the past.  Greg's Fourth Adventure in Time is recommended for home and school libraries and has earned the Literary Classics Seal of Approval.