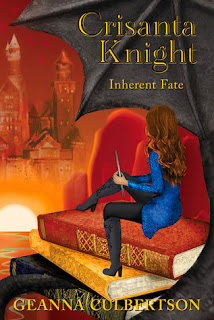 In the enchanted realm of Book, wherein resides Crisanta, daughter of famed Cinderella, taking charge of one's character is not encouraged.  That is meant to be left to fairy godmothers and of course, the Author.  But to a young girl who wishes to control her own destiny, that simply won't do.  Crisanta has attended Lady Agnue's School for Princesses & Other Female Protagonists, so she is fully aware of what's expected of her, but being demure and subservient really isn't her thing.  Prophecies be damned, Crisanta won't let things go down without a fight.

Crisanta Knight, Inherent Fate, by Geanna Culbertson, is an entirely unique and wonderfully creative tale of princes, princesses and other leading characters in an otherworldly fairytale realm.  Unlike any fairytale you may have encountered, this book is full of page-turning surprises.  From the entertaining and informative prologue, which sets things up nicely even for those who have not read the earlier Crisanta books, this novel draws readers into its delightfully enchanting story.  With strong character development, a plot that sears, and a tenacious female protagonist, this book is sure to become a favorite with readers of all ages.  Inherent Fate reads well enough as a stand-alone, but we can't imagine why anyone would deprive themselves of starting at the beginning with the first book in this highly engaging series.  - Recommended for home and school libraries, Crisanta Knight, Inherent Fate has earned the Literary Classics Seal of Approval.