The Enchanters' Child, by Navya Sarikonda, has earned the Literary Classics Seal of Approval 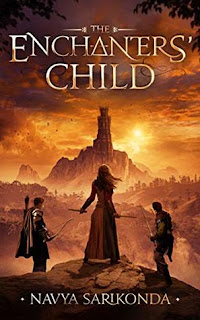 Wren is the last of the Arobols, a group of magic-wielders. Her parents were murdered when she was just a child and she has devoted her young life to finding her parents' killer. Through a series of events, she is forced to flee her home and soon finds herself joining efforts with two young men who, along with her, wish to find the Dark Sorcerer whom she now believes was behind the untimely death of her parents. Wren must keep her identity to herself, but unbeknownst to her, her new cohorts Quinn and Zayne have their own share of secrets.

Teen author Navya Sarikond has crafted an intriguing tale of magic, honor, and friendship. This compelling story, rich with vivid imagery and solid character development, is one that will enthrall readers of all ages. Recommended for home and school libraries, The Enchanters' Child has earned the Literary Classics Seal of Approval.
LITERARY CLASSICS Book Awards & Reviews International Book Awards • Top Honors Youth Book Awards • Seal of Approval http://www.clcawards.org
Posted by Author.Pub at 2:46 PM