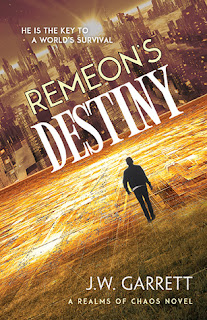 At almost 16 years of age, Thomas is nearly a man.  Growing up in the late 1940s it is presumed he will soon begin helping his father run the farm.  In rural Virginia, there's not much hope for the boy to escape the simple life of a farmer, but he dreams of more . . . of seeing the world.  Thomas' father is ready to introduce him to other aspects of the business, but first, he expects the boy to get his head out of the clouds.  When Thomas turns ill, it would appear his dreams of liberation are shattered. Then, through a remarkable turn of events, the young man finds himself transported to an alternate world, a planet on which he is the only hope for the survival of its inhabitants.  This unlikely hero has much to learn as he tries to find his way towards fulfilling an extraordinary destiny.

Author J.W. Garrett's Remeon's Destiny, is a marvelous coming-of-age tale that will appeal to readers of all ages.  With an engaging plot, characters that are fleshed out in very real and tangible ways, and fascinating sci-fi elements, this book has much to offer a YA audience.  Recommended for home and school libraries, Remeon's Destiny has earned the Literary Classics Seal of Approval.

Email ThisBlogThis!Share to TwitterShare to FacebookShare to Pinterest
Labels: Award-winning YA books, Best YA books, Recommended YA novels, YA Fantasy, YA science fiction