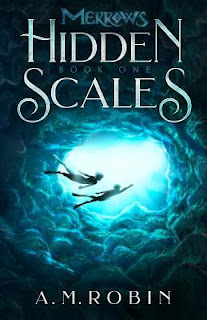 Young Mira is a precocious 11-year-old child. She tries to stay out of trouble, but her curiosity and sense of adventure always seem to get the best of her. Adopted as a baby, she has been raised by Appoline, a woman for whom Mira has a great deal of love and respect. When rumors that a man and a young boy have been kidnapped and whisked away on a winged horse, Appoline insists Mira stay close to home. When Mira and her best friend disobey Appoline's wishes things begin to spiral out of control. But Mira's troubles have only just begun, as she comes to realize she might just be a merrow, a water-breathing creature believed to have been extinct for over a century.

Merrows, Book 1, Hidden Scales, by A.M. Robin is a skillfully crafted tale with much to offer a youth audience. This suspenseful story is one that will keep readers entranced clear through to its satisfying ending which is perfectly set up for another exciting book in this series. With outstanding character development including a strong female protagonist, an intelligent sidekick, and caring and insightful adult role-models, this book has undercurrents which provide many meaningful messages for young readers. Recommended for home and school libraries, Hidden Scales has earned the Literary Classics Seal of Approval.