The Askren Boys earns the Literary Classics Seal of Approval 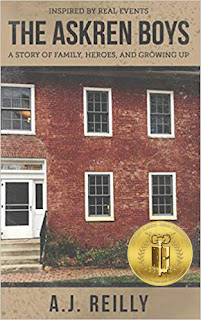 Ten-year-old Ray looked up to his older brothers Ralph and Floyd more than Captain America or even the Lone Ranger.  He longed to follow in their footsteps by helping their dad out in the field, but he never could seem to get out of the kitchen where he was expected to set the table like a girl.  Then in 1941 with the bombing of Pearl Harbor everything began to change.  The United States was at war and soon after Ray’s brothers enlisted in the Army.  The ensuing loneliness seemed unbearable to young Ray as the family waited for news of the two oldest Askren boys.


Author A.J. Reilly is a truly gifted writer.  From the very first page of this heartfelt book, readers are swept away to an era when family was of the utmost importance, and a man’s word was his honor.  Skillfully penned, with historical accuracy, The Askren Boys tells of simpler times when you could enjoy a burger with fries and a soda for fifty cents.  This book is highly recommended for home and school libraries and has earned the Literary Classics Seal of Approval.