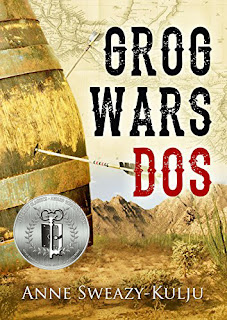 In book 2 of the Grog Wars series our protagonist is bound for Mexico where the presiding Austrian Monarch declares himself in need of a brew master.    Sweazy-Kulju can spin a yarn like nobody’s business and that’s never been more apparent than with the hilarious antics of Max and Charlotte: “two of the most unfortunate characters ever snubbed by history”.  In this second book, which reads well as a stand-alone, readers are instantly drawn into the old west town of Portland, Oregon in 1861 for a necktie sociable.  “The media loved a good hanging.”  From one page to the next one can’t help but become immersed in the sites, sounds and dialects of the region, be it the Oregon of the old West, or down south in Mexico.  Sweazy-Kulju adeptly skips from one character to another with perfect aplomb.  Readers are sure to revel in this humorous tale which is a light-hearted and highly entertaining read.