My Crunchy Life earns the Literary Classics Seal of Approval 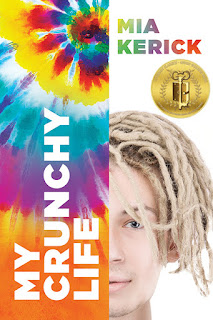 First, he changed his name to Kale, then he started working on dreadlocks, and now he’s decided it’s time to find a cause.  It’s all a part of Kalin’s plan to implement his new Hippie lifestyle.  Everyone knows you can’t be a hippie if you don’t have a cause.  So Kale joins REHO (Rights for Every Human Organization), an all-encompassing group intent upon paving the way for all causes related to the human species.  Unfortunately, Kale really can’t admit to the group that his only reason for attending is for the sake of finding his own cause.  But thankfully he’s saved by a distraction which spares him from having to admit his hippie failings.  That’s where Kale and Julian meet for the first time.  Julian is still working on finding his way to becoming who he always believed himself to be, a girl.  When Kale and Julian meet they are just two floundering kids trying to find purpose and make sense of their lives.  And that’s where it all begins.  Author Mia Kerick breathes life into the characters of this coming of age tale which is peppered with witty accounts interspersed with genuinely heartfelt moments of self-realization.  The author skillfully addresses very relevant topics with sparkling clarity in a way that will be relatable to a YA audience.  Recommended for home and school libraries, My Crunchy Life has earned the Literary Classics Seal of Approval.

Email ThisBlogThis!Share to TwitterShare to FacebookShare to Pinterest
Labels: best books for teen audiences, books about teens trying to discover themselves, coming of age books for teens