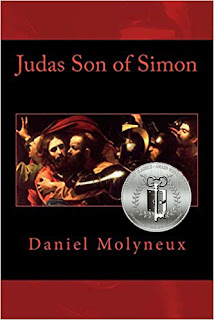 Judas Iscariot is one of the most well-known characters in the bible, yet little is known about the man who betrayed Jesus to the Sanhedrin in the Garden of Gethsemane.  He was arguably one of the most educated of Jesus’ disciples.  But at a time when Rome was waging war against the Jews, as fear that Jesus might lead his followers to rise up against Roman rule, many popular conclusions about Judas are in conflict with what we now presume about this lesser-known disciple.  Daniel Molyneux’s Judas Son of Simon is a work of fiction, and as such, much of the content in this book is mere speculation, but the author does provide fascinating insight into a time and place in biblical history that is not often represented.