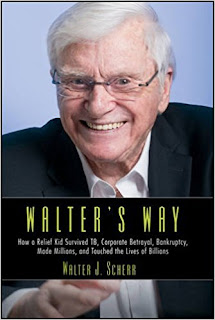 Walter Scherr grew up in Queens, New York during the depression.  He, along with the buddies he'd known since childhood, couldn't wait to enlist in the army as part of their patriotic duty.  But after taking the required physical Walter was diagnosed with Tuberculosis, a life-threatening and highly contagious illness.  He spent the next seven years in quarantine fighting the dreaded disease while his friends were off fighting in the war.  After finally being released with a clean bill of health he went on to become a successful and highly influential business man.  His road to success was riddled with speed bumps and detours.  But with a strong sense of purpose, high ideals, and a willingness to learn, he had a tremendous impact in the U.S. and abroad, making positive changes that are still causing ripples in how businesses operate today.  This a compelling story that will encourage and inspire readers of all ages.  Walter's Way is highly recommended and has earned the Literary Classics Seal of Approval.