Eye of Charybdis, by Steve Wilson, earns the Literary Classics Seal of Approval 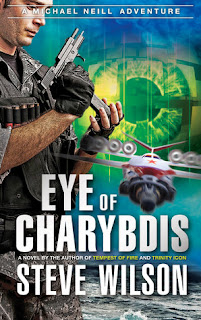 Marine Corps Captain Michael Neill and his team are on a quest to find answers in the mysterious case of a commercial airliner which went down with all its passengers still on board.  Meanwhile, in a possible related mission, they set out to find a tactical aerial weapon believed to be hidden off the coast of Russia.  Their goal is to covertly seek and destroy this enigmatic vessel.  Working together with a highly sophisticated team of men and women, united in their efforts to carry out this clandestine mission, they soon find themselves at the mercy of other team players in an internationally driven game of politics.  Neill relies on personal experience, the skill and wisdom of his team-members, and ultimately that of his faith.

Author Steve Wilson is a fluid and articulate storyteller whose background in military matters contributes to his ability to paint vivid pictures with scenes that spring to life.  He seems to possess an innate ability to dummy things down just enough that even the most non-technical person can still understand and enjoy each thrilling, fast-paced moment of this novel.  Wilson’s Eye of Charybdis is highly recommended and has earned the Literary Classics Seal of Approval.