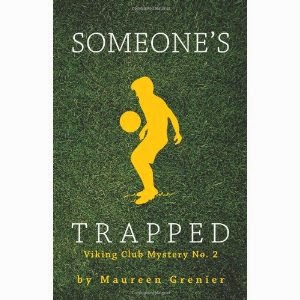 Someone's Trapped, by Maureen Grenier, is the engaging sequel of three friends who are reunited in their efforts to solve a mystery and save the day!  When Rebecca is under suspicion of having committed a crime, this trio joins forces to trap the real thief.  Rebecca' s friends, two fellow soccer enthusiasts Chris and Jaylon, vow to help clear Rebecca's good name.

Someone's Trapped is the second part to a series involving the Viking Club agency, three mystery solving kids. This book enforces positive values including teamwork, both on and off the playing field, as they work together to solve the mystery and also resolve a few personal problems that come into play as this entertaining story unfolds.  Author, Maureen Grenier has created an age appropriate book with lots of fun and interesting twists.  The book is written such that one can easily pick up with the second book in the series without any prior knowledge.