Sons of the Sphinx earns the Literary Classics Seal of Approval 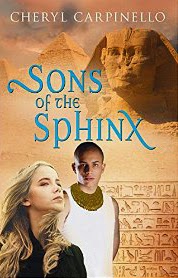 15 year old Rosa has an interesting, if not unusual, problem . . . ghosts talk to her.  It's troublesome, to say the least, to have dead people trying to carry on a conversation with her while she's taking a math test.  But one day her unique connection to the underworld takes her headlong into an adventure through time.

Rosa has a fascination with the Egyptian Dynasty, and in particular - King Tut.  So when she is given an assignment to do a project on ancient history she naturally decides to base it on the life of the boy king.  --That's when things really start to get weird for Rosa because for the first time ever an apparition appears before her, and the ethereal being is none other than the one-and-only King Tut.  Soon after, Rosa is whisked away to ancient Egypt where she experiences first-hand encounters with tomb raiders, evil spirits and even friends and foe of King Tut.

Sons of the Sphinx is an engaging work of fiction that incorporates many fascinating historical facts that are skillfully intertwined within the pages of a truly terrific read.  Sons of the Sphinx comes highly recommended and has earned the Literary Classics Seal of Approval.