A Secret in Time, by H.Y. Hanna, earns the Literary Classics Seal of Approval 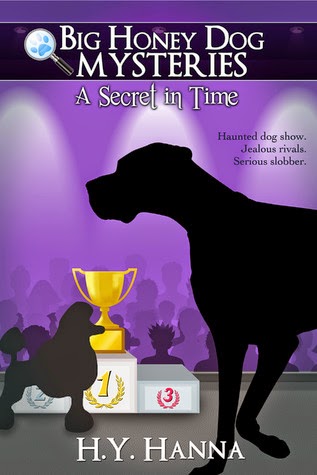 A Secret in Time, by H.Y. Hanna, is a captivating story told in the first "person" by Honey, a charismatic Great Dane prone to excessive drooling.  Honey accompanies her human to the Royal Dog Show where she meets another pooch that looks identical to her.  She is asked to step in as a replacement in the dog-show when her look-alike is poisoned.  But it would appear that the offense is no fluke, as this event coincides with a string of other unfortunate episodes.

Honey and her friends pool their efforts and talents to find out what's behind the mysterious accidents.  Could it be the Phantom Hound rumored to haunt the grounds where two champion show-dogs died years earlier?

Honey and her friends are determined to find answers.  They each utilize their own unique talents as, together, they investigate the situation.  These clever canines make use of a unique system of communication, including "pee-mail" which they use to carry out their plan to catch the culprit.  But can they unscramble the clues to help save the dogs in the Royal Dog Show before it's too late?

A Secret in Time is a frolicking adventure with loads of fun puppy puns and exciting antics all rolled into a thrilling mystery that's a great selection for young readers.