Author Spotlight - Stacie Haas on her award-winning book, Freedom for Me: A Chinese Yankee 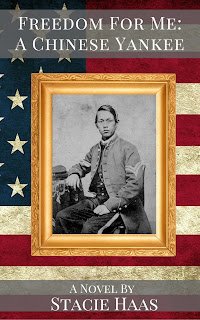 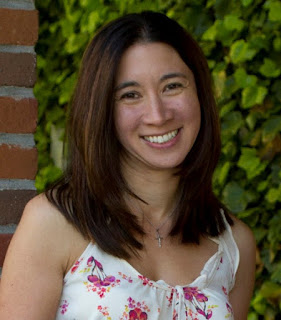 HOW DID YOU GET THE IDEA FOR YOUR AWARD WINNING BOOK?
Many years ago, a friend of my father’s gifted me an old stack of his Civil War magazines. He’d known I was a Civil War buff and thought I’d enjoy them. On the back of one of them was an article titled, “An Oriental Yankee Soldier,” and it introduced me to Cpl. Joseph Pierce, a Chinese soldier who served in the Fourteenth Connecticut infantry in the American Civil War. I was surprised and excited to learn about him as I hadn’t known there were any Chinese Civil War soldiers. I have Chinese heritage, so I was excited by that representation. Years later, after taking several courses with the Institute of Children’s Literature, I decided to write his story for young readers.

WHAT IS YOUR FAVORITE LINE FROM YOUR AWARD WINNING BOOK AND WHY?
"You’re too young, and besides, there ain’t no such thing as a Chinese Yankee.” This line is spoken by Robert, the protagonist’s older brother, early on and it sets up the entire premise of the book. Can a Chinese Yankee find his place in an America embroiled in a war fighting over the issue of slavery and the meaning of freedom?

WHICH OF YOUR CHARACTERS FROM YOUR AWARD WINNING TITLE DO YOU BELIEVE IS MOST LIKE YOU AND WHY?
The protagonist, Thomas, is most like me. I relied upon many of my own experiences as a person of color to write the more personal, emotional aspects of his growth journey.

WHAT MESSAGE DO YOU HOPE READERS WILL GLEAN FROM YOUR AWARD WINNING BOOK?
I hope they understand that America, even in the midst of a great battle for freedom, is the land of opportunity for all people.

WHO INSPIRED YOU TO BECOME A WRITER?
It wasn’t a person so much as the process of writing itself. From a very young age, I wrote things down to figure things out. I often couldn’t wrestle with a problem or understand how I felt about something until I formed my thoughts into the written word. When I later discovered that I could tell stories in a compelling way, I was hooked. It’s challenging, but there’s nothing like the feeling I get when I’ve done it successfully.

WHO HAS HAD THE GREATEST INFLUENCE ON YOUR WRITING STYLE? - PLEASE ELABORATE:
Every book I read influences me in one way or another. I love reading books of all genres, but especially books that I’d consider “page turners.” I often ask, ‘how did the author do that?’ I’m always learning from the wisdom of other authors.

TELL US SOMETHING INTERESTING ABOUT YOUR EXPERIENCE AS A WRITER:
I don’t know how interesting it is, but I often write with my youngest strapped to me in a baby carrier while standing up at my kitchen island. It’s a bit like sausage-making; it’s not always the prettiest process, but it’s what works for me in this stage of life!

TELL US A LITTLE ABOUT YOUR WRITING PROCESS:
I start with an idea. I am always eager to jump right into the writing, but I find that I benefit from a little time spent plotting as well. I like ‘loose’ plots, where I am free to take the story where it naturally goes during the writing, but also a plot in which I know the climax I’m working toward.

WHAT IS YOUR GREATEST CHALLENGE AS A WRITER?
My greatest challenge is finding the right kind of time. I’m a wife and mom to four kids, ages 14 to 1, and I also have a job in the communications field for a Fortune 500 Company. I work hard to carve time into my day (and nights), but it’s not always possible. I try to make every second count. I also carry a notebook around with me so I can jot down inspiration for new stories wherever I am.

IF YOU COULD BE COMPARED TO A WELL-KNOWN AUTHOR WHO WOULD YOU MOST WANT THIS TO BE AND WHY?
That’s an incredibly tough question. There are so many fantastic authors out there and I don’t know that I can be compared to any of them yet. Doesn’t everyone want to be the next Kate DiCamillo?

HOW DID YOU GET PUBLISHED?
I participated in a Twitter #pitmad event in which I had to pitch my book in 140 characters or less to attract agents and publishers. I was fortunate to get several likes from both. That led to my first two requests for full manuscripts and eventually led to my contract with Melody Press, the kids and teens imprint of 50/50 Press, Inc.

Before that, however, I had to write the best book I could. I did multiple edits—and got professional feedback. The key to my contract, I think, was nailing the first chapter. I’d struggled with it from the very beginning and I think it contributed to my early rejections. Once I “fixed” it, that’s when I finally started to see interest.

CAN YOU OFFER ANY ADVICE FOR WRITERS ON HOW BEST TO PROMOTE THEIR BOOK?
I’m still figuring this one out. I’m finding that the upper middle grade market is a tough one from a sales perspective. My publisher is a wonderful small, independent publisher but it doesn’t have the reach of the big six that get near-automatic ins to bookstores and the school market. I’m also in a part of the country that heavily relies on the use of Accelerated Reader quizzes for book recommendations, but neither I nor my publisher was initially aware of how to get a book considered for AR quizzes. Hint, it has to be done pre-publication.

I’ve run some Facebook ads and gotten what I feel is a good amount of good publicity in local papers and such. I’ve also entered my book into award competitions like Literary Classics’s, believing that recognition would be helpful in selling my book. I’ve been most successful in reaching out directly to teachers and administrators in schools.

WHAT HAS BEEN YOUR GREATEST LITERARY ACCOMPLISHMENT?
Winning the Literary Classics Gold Medal for Coming of Age Upper Middle Grade fiction and the Silver for Upper Middle Grade Historical Fiction! What an honor. Beyond that, finding a publisher to bring my story to the world. I work with a collaborative, author-centric publisher in 50/50 Press, Inc. and I’m grateful to co-owners for seeing promise in my work.

WHAT ARE YOUR GREATEST LITERARY ASPIRATIONS?
To write books that both entertain and educate readers. I’d love to write a best-seller someday and find a way to write creatively full-time, but until then, I am happy to share stories from the heart and have the opportunity to inspire people.

TELL US SOMETHING PEOPLE MAY NOT KNOW ABOUT YOU THAT THEY MIGHT FIND INTERESTING:
I love cheering on the sports-teams of my hometown. My favorite two teams are the Cincinnati Reds and Cincinnati Bengals. I’m a long-suffering fan, to say the least!

DO YOU HAVE ANY NEW BOOKS IN THE WORKS?
Yes. I’m working on a young adult book and another middle grade story—both inspired by my life and that of my kids.