Author Spotlight - Krysten Lindsay Hager on her award-winning book, Landry in Like 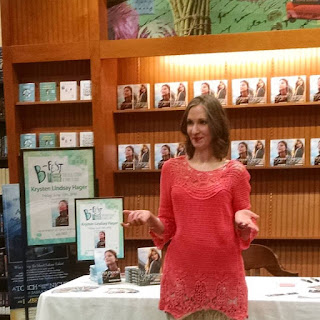 HOW DID YOU GET THE IDEA FOR YOUR AWARD WINNING BOOK?
I have taken ideas from my own life growing up for the Landry character. In this book I wanted Landry to go through the struggles of speaking up for herself, dealing with friendships and how to handle outgrowing a friend. Landry has grown a lot throughout the series and she wants to stay friends with her longtime best friend who hurt her feelings, but there’s not just a mistrust there, but the fact that as the two girls have grown, they’ve also grown apart. I wanted to show that you can evolve as a person without leaving anyone behind, but also without holding yourself back. That was a theme I never saw in books when I was growing up; I believed drifting apart didn’t mean moving on, but rather meant losing a relationship.

WHAT IS YOUR FAVORITE LINE FROM YOUR AWARD-WINNING BOOK AND WHY?
It would be the line Landry says about going to the pool, because there’s an age where swimming goes from having fun in the pool to feeling awkward about being seen in a bathing suit and feeling judged. I shared this line on social media and had so many comments and messages over it from women and girls of all ages who have felt this way. “When did that all change? I remember being so excited to go to the pool. Swimming and having fun. When did it get all awkward and become about what we look like in bathing suits or with our hair wet?”

WHICH OF YOUR CHARACTERS FROM YOUR AWARD-WINNING TITLE DO YOU BELIEVE IS MOST LIKE YOU?
Landry is most like me because she has gone through many of the same situations I did and she has my sense of humor. She’s a bookworm who overthinks and she keeps her sense of humor in even the most anxious moments in life.

WHAT MESSAGE DO YOU HOPE READERS WILL GLEAN FROM YOUR AWARD-WINNING BOOK?
I’d like my readers to see how important it is to stay true to yourself and your values and to appreciate what makes you unique. Growing up I often wanted to be more like other people because I felt different--even my interests were different. I wanted to fit in more than anything and I now realize it’s what makes you different that makes you special.

WHAT INSPIRED YOU TO BECOME A WRITER?
I loved to read growing up and I always thought it would be amazing to impact someone’s life the way my favorite authors impacted mine.

WHO HAS HAD THE GREATEST INFLUENCE ON YOUR WRITING STYLE?
I would say Judy Blume, as she really gets to the way tweens and teens feel. While reading her books I could see she felt what her characters were feeling.

TELL US SOMETHING ABOUT YOUR EXPERIENCE AS A WRITER:
I had an experience where I was on a talk show and was asked if I had gone through an experience like Landry where I felt insecure and left out. I was on live TV and realized I was about to expose a side of myself that had been difficult for me, but I knew I needed to so the readers would know I had experienced these issues firsthand. It was awkward and uncomfortable, but ever since I have shared experiences like that I find more and more people reach out to me to share their own experiences.

TELL US A LITTLE ABOUT YOUR WRITING PROCESS:
I don’t outline, but if I’m working on a series then I have an idea where I’m going with the story. I make playlists for all the stories I work on to inspire me and use notebooks to jot down ideas and dialogue. I also keep a Pinterest board for each story I work on and then make it public when the book is released.

WHAT IS YOUR GREATEST CHALLENGE AS A WRITER?
Probably marketing. I think most writers would just like to focus on writing as the business side of things is not what we prefer to work on, but it’s part of the business.

HAS YOUR WORK BEEN COMPARED TO ANY WELL-KNOWN AUTHORS ?
I had a review compare me to Ann M. Martin and one say my work reminded her of Melody Carlson, and that meant a lot since I respect their work so much.

HOW DID YOU GET PUBLISHED?
I was in a group for freelance writers and two of the women were writing fiction as well and shared that they were happy with their publisher and I filed that name away for down the road.

CAN YOU OFFER ANY ADVICE FOR WRITERS ON HOW BEST TO PROMOTE THEIR BOOK?
I think being yourself is best so people know what to expect from your writing. Sometimes I see someone online and their persona is so different from what they write and it throws me. It’s like when an actor who is known for being funny and lighthearted on a show goes on a talk show and is serious and so unlike their character that you feel taken aback.

WHAT HAS BEEN YOUR GREATEST LITERARY ACCOMPLISHMENT?
I think when I had my first sequel published and I could say I had a series. That had always been a dream, but it was one I never thought would come true.

WHAT ARE YOUR GREATEST LITERARY ASPIRATIONS?
To reach more readers and to keep putting books out that people want to read.

TELL US SOMETHING PEOPLE MAY NOT KNOW ABOUT YOU THAT THEY MIGHT FIND INTERESTING:
I do tons of research for my rockstar romance series, The Cecily Taylor Series, and I have watched and read tons of music biographies. I’ve learned so much and discovered a lot of singers from the past that I’m a big fan of now.

IS THERE ANYTHING ELSE YOU'D LIKE TO SHARE WITH OUR READERS?
I write upper middle-grade books as well as clean young adult fiction. I’m also working on writing women’s fiction as well. I love reading (and watching) mysteries even though I don’t write them, but Landry loves them as well. In fact I have a Nancy Drew-type series she’s obsessed with in the books that’s also a video game.

WHAT OTHER BOOKS HAVE YOU PUBLISHED?
Middle grade:
True Colors
Best Friends...Forever?
Landry in Like

Young adult:
Next Door to a Star
Competing with the Star
Dating the It Guy
Can Dreams Come True
In Over Her Head: Lights, Camera, Anxiety

DO YOU HAVE ANY NEW BOOKS IN THE WORKS?
Yes, I’m working on the next book in my clean teen romantic comedy series, The Cecily Taylor Series, about a teen who gets the chance to be in her favorite singer’s music video and they begin dating. I’m also working on some women’s fiction.

IS THERE ANYTHING ELSE YOU'D LIKE TO SHARE WITH OUR READERS?
In Over Her Head: Lights, Camera, Anxiety, hit number one on Amazon’s Hot New Releases for young adult humor books. It’s the second book in my rom-com series and in this one Cecily gets the opportunity to model in New York and see her teen rock star boyfriend, but it’s hard being in high school and dealing with keeping their relationship secret and reading about all the girls who want to date him online—not to mention the relationship gossip! It’s a fun take on what it’d be like to date your dream crush.