Author Spotlight - Laurie Germaine on her Award-Winning Book, Tinsel in a Tangle 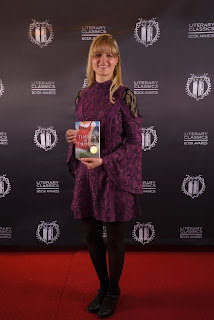 HOW DID YOU GET THE IDEA FOR YOUR AWARD WINNING BOOK? I got inspiration from two sources: the portrait Gaye Francis Willard had done of Santa kneeling at the manger, and a puzzle my mom had given me over a decade ago, depicting Dept 56’s North Pole series. I mashed them together with my love for the German language and Tinsel’s story began to take shape.

WHICH OF YOUR CHARACTERS FROM YOUR AWARD WINNING TITLE DO YOU BELIEVE IS MOST LIKE YOU AND WHY? How about the one who is most unlike me? Which would be my main character, Tinsel. And I did that on purpose, for I was coming out of a season of depression and needed to immerse myself in a character who tries to stay positive and optimistic despite the mistakes she makes along the way.

WHAT MESSAGE DO YOU HOPE READERS WILL GLEAN FROM YOUR AWARD-WINNING BOOK? No matter your circumstances, no matter what you hear, you’re not an accident, or a random happenstance, or a mistake. You were created on purpose, with purpose, and for a purpose.

WHO HAS HAD THE GREATEST INFLUENCE ON YOUR WRITING STYLE?  Janette Rallison, Kasie West, and Kristin Rae. I’ve been reading Rallison’s books for years and have always enjoyed her clean, light-hearted style. I discovered West & Rae more recently and around the same time, shortly before I buckled down to start on Tinsel. It’s their characters’ banter and wit that influenced Tinsel’s voice and how my own characters interacted with each other.

TELL US A LITTLE ABOUT YOUR WRITING PROCESS: I borrow teaching from Randy Ingermanson’s Snowflake Method, combine it with the Mirror Moment and 14 “signposts scenes” from James Scott Bell’s Write Your Novel From the Middle, and throw in a detailed character interview on the side. Thus, before I ever start the actual writing, I have an idea as to who my characters are, their backstory, the lie they believe, and several key scenes. I know where I’m headed and have a decent idea how to get there, but I’ve left plenty of wiggle room for new discoveries along the way.

WHAT IS YOUR GREATEST CHALLENGE AS A WRITER? Comparing myself to other writers. My journey to publication took far longer than many others, and I’m not one of those people who can churn a book out in a matter of months. I have to remind myself that just because I don’t write like so-and-so, and just because it takes me longer to finish a story than big-name authors doesn’t mean there’s something wrong with me as a writer or that I should find another vocation.

HOW DID YOU GET PUBLISHED? I queried over thirty agents and small publishers, and after a nibble here and there, I got a request for a full from one publisher and an offer from another. The former didn’t pan out, so I was thankful the latter was willing to take the chance on an unknown writer pitching a Christmas fantasy as a debut novel.

TELL US SOMETHING PEOPLE MAY NOT KNOW ABOUT YOU THAT THEY MIGHT FIND INTERESTING: I’m an avid knitter. It’s a passion that rivals writing at times. Typically, if my writing hits a slump, my knitting takes off. There are many times I’ve questioned if I should be giving that part of my creativity more attention, but so far, writing has always won out.

DO YOU HAVE ANY NEW BOOKS IN THE WORKS?  I’m currently working on a sequel to Tinsel in a Tangle, the sloppy first draft of which took me over a year to complete, so no release date yet. But here’s a pitch-in-progress: Someone’s out to destroy Christmas, starting with the reindeer. From opposite sides of the world, two BFFs, along with Santa’s grandsons, must battle the cunning schemes of an ancient power before it sabotages the elf clans and takes out the Kringles, one by one.