Author Teresa A. Stern on her Award Winning Book 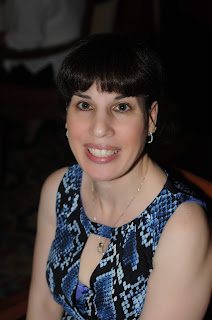 WHAT INSPIRED YOU TO BECOME A WRITER?
When I was 19 years old I started thinking about the old British television show the Avengers starring Patrick Macnee as John Steed. My friend Nancy Cagle told me to write down my ideas, so I wrote them in a script form for a television show. That’s how my writing career started.


WAS THERE A TEACHER OR OTHER MENTOR WHO INFLUENCED YOUR WRITING - PLEASE ELABORATE:
My friend Nancy Cagle, a substitute teacher and artist, influenced my writing. Her philosophy was, “if you have an idea or, a dream about a book write it down.” That is the best advice I ever got from her.


HOW DID YOU GET THE IDEA FOR YOUR AWARD-WINNING BOOK?
I got the idea for the Grocery Store Alphabet Game from a food dictionary. I decided to expand the idea and turned it into an alphabet book. I had mother and daughter take turns with the alphabet and share a little story of the food or items they found in the grocery store.


WHAT IS YOUR FAVORITE LINE FROM YOUR AWARD-WINNING BOOK ?
My favorite line from the book is Z for Zucchini. When Kayla said, “Zucchini, but what is a zucchini, Mommy?” “It’s a long skinny green squash, and if I tell your daddy to buy some, he will get cucumbers instead!”

The reason I like that line because many people get cucumbers and zucchini mixed up, since they look somewhat alike.


WHICH OF YOUR CHARACTERS FROM YOUR AWARD-WINNING TITLE DO YOU BELIEVE ARE MOST LIKE YOU AND WHY?
I am like Kayla. I didn’t like grocery shopping with my parents, because my dad had to read everything he bought and it took a long time to finish shopping. So, I went to the magazine section of the store and I read the teen magazines.


WHAT MESSAGE DO YOU HOPE READERS WILL GLEAN FROM YOUR AWARD-WINNING BOOK?
The Grocery Store Alphabet Book is more like a Norman Rockwell story between mother and daughter. Plus, it works as a nutritional book for children.


TELL US SOMETHING ABOUT YOUR EXPERIENCE AS A WRITER:
The only thing I can say is my ideas come from dreams, television shows, and from observing children in my child development class, when I worked in daycare centers.

Once I got an idea from a drawing that didn’t make it into my second book, and it gave me the title for my upcoming third book. Most of the time my stories are from my dreams. I wake up thinking, “That would be a great story for a book!”


IF YOU COULD BE COMPARED TO A WELL-KNOWN AUTHOR WHO WOULD YOU MOST WANT THIS TO BE AND WHY?
I would like to be compared British novelists such as Lewis Carroll who wrote Alice in Wonderland and Frances Hodgson Burnett, author of The Secret Garden and Beatrix Potter who wrote Peter Rabbit. I am not British but I was inspired by my childhood friend Yolanda Carroll, who loved English stories and Robin Hood.


HOW DID YOU FIND AN AGENT / GET PUBLISHED?
In 2013 my friend Lupita Gomez told me about her friend Vanessa Zepeda who had her children’s book Superhero Princesses published by Sarah Book Publishing. I contacted them by phone and made an appointment to go to their headquarters to submit my manuscript. Two days later I received an email that my book Grocery Store Alphabet Game was accepted for publication.


IF A CLOSE FRIEND OR LOVED ONE WANTED TO WRITE A BOOK, WHAT GREATEST PIECE OF ADVICE WOULD YOU GIVE THEM?
I would say “Write what you like and be true to yourself while you’re writing.”


CAN YOU OFFER ANY ADVICE FOR WRITERS ON HOW BEST TO PROMOTE THEIR BOOKS?
Promote through social media such as Facebook and Twitter, Also use radio shows and local newspapers, and have a friend or find a professional blogger to blog about your book and create a webpage.


TELL US A LITTLE ABOUT YOURSELF:
I like to collect old Beatles Memorabilia and the history of the Alamo.  I graduated from the University of Mary- Harden Baylor (Belton, Texas) with a degree in Professional Studies in 1999. I currently reside in Brownsville, Texas.  Since 2002 I have been working for a nonprofit organization (VAIL) Valley Association for Independent Living that helps people with disabilities.

IS THERE ANYTHING ELSE YOU'D LIKE TO SHARE WITH OUR READERS?
Writers are small businesses in our communities. Promoting authors and their books brings awareness to literacy for the children of tomorrow. These children may be inspired by our local role models and become writers.


WHAT OTHER BOOKS HAVE YOU PUBLISHED?
The Tea Party on Henry’s Island. Sarah Book Publishing (October 5, 2016)

DO YOU HAVE ANY NEW BOOKS IN THE WORKS?
Yes, The Christmas Eve Dinner on Annie’s Island

The story is about a Christmas Eve Dinner when The Rabbit Family celebrate Christmas Eve and Hanukkah with their friends and neighbors on Annie’s Island.

It is not available yet but, it will be self-published through CreateSpace Independent Publishing, and sold through Amazon, CreateSpace Store, and Barnes & Noble as soon when the book is published.