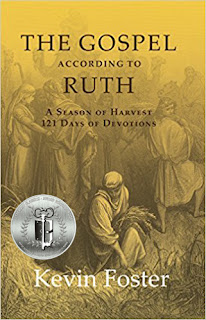 HOW DID YOU GET THE IDEA FOR YOU’RE AWARD-WINNING BOOK?
I got the idea for my devotional book by following the life and times of an Old Testament Bible book named Ruth, a story of widow women. Naomi moved to the land of Moab with her husband and two sons. After her husband dies, the sons marry and subsequently die, leaving the women childless. Ruth, one of the daughters-in-law, returns to the Promised Land with Naomi, her mother in law, and begins a new life, while the other daughter-in-law remained in Moab. Ruth met and married a prominent wealthy man and she bears him a son named Obed, who is the father of Jesse, who is the father of David, king of Israel.


WHAT IS YOUR FAVORITE LINE FROM YOUR AWARD-WINNING BOOK AND WHY?
“And Ruth said, Intreat me not to leave thee, or to return from following after thee: for whither thou goest, I will go; and where thou lodgest, I will lodge: thy people shall be my people, and thy God my God: Where thou diest, will I die, and there will I be buried: the LORD do so to me, and more also, if ought but death part thee and me.” (Ruth 1:16-17). This is a verse taken from the book. It speaks of relationships. Everyone has relationships in this life, some are more entrusted than others. Ruth learned the value of true friendships and relationships, and that’s what I wanted to express in the book. This verse is used for many marriage ceremonies throughout the world.


WHICH OF YOUR CHARACTERS FROM YOUR AWARD-WINNING TITLE DO YOU BELIEVE ARE MOST LIKE YOU AND WHY? I am like Ruth. My former relationships died in Moab symbolically. It was only after I journeyed to the promises of God that my life and relationships became alive and fruitful.


WHAT MESSAGE DO YOU HOPE READERS WILL GLEAN FROM YOUR AWARD-WINNING BOOK? No matter who you are, or where you are on life’s road, there is a relationship of love, peace and rest found in the promises of God.


TELL US SOMETHING ABOUT YOUR EXPERIENCE AS A WRITER:
I suffer from dyslexia and I refused to let that defeat me as a writer.


HOW DID YOU GET PUBLISHED? I found my Publisher online. I called him up, send him my transcript, he read it, and wanted to publish it.


IF A CLOSE FRIEND OR LOVED ONE WANTED TO WRITE A BOOK, WHAT GREATEST PIECE OF ADVICE WOULD YOU GIVE THEM? Hold a thought and write about it every day.


CAN YOU OFFER ANY ADVICE FOR WRITERS ON HOW BEST TO PROMOTE THEIR BOOK? Social media, and great book contest like the Literary Classics Book Awards!


WHAT HAS BEEN YOUR GREATEST LITERARY ACCOMPLISHMENT? Finishing my first book. Receiving an award for that book, and feedback on how my book has inspired and changed the lives of those who have read it.


WHAT ARE YOUR GREATEST LITERARY ASPIRATIONS? I would like to write and publish an inspirational book every two years and travel the world as a result, to teach, inspire and encourage others about the things of God.


TELL US SOMETHING PEOPLE MAY NOT KNOW ABOUT YOU THAT THEY MIGHT FIND INTERESTING:
I traveled the world as a skateboarder and a break dancer and was paid to do so. I was the principal dancer on six national TV commercials. I’m both a Physician Assistant and a Nurse Practitioner. I had brain surgery to remove a tumor and I am a cancer survivor. However, a greater challenge that brings me joy is being married with five children.


IS THERE ANYTHING ELSE YOU'D LIKE TO SHARE WITH OUR READERS?
Look to God for all your needs.


WHAT OTHER BOOKS HAVE YOU PUBLISHED? The Gospel According to Jonah: A Call to Obedience, 121 Days of Devotions, is my second published book in a three devotional book series.