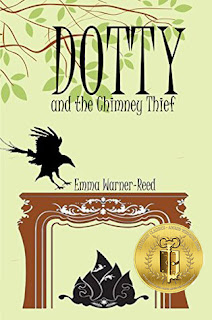 WHAT INSPIRED YOU TO BECOME A WRITER? I just sort of fell into it, really. I was commissioned to write a legal textbook whilst working as a Law Lecturer at an English university and then several more after that – and I came to realise how much I liked writing! I didn’t sit down and write my first work of fiction until 2015, though.


WAS THERE A TEACHER OR OTHER MENTOR WHO INFLUENCED YOUR WRITING - PLEASE ELABORATE: Not a teacher, as such, no. I am influenced by the classic stories I love to read – Alexandre Dumas, William Harrison Ainsworth, Edgar Rice Burroughs, Baroness Orczy (Scarlet Pimpernel) and anything by Dickens.

HOW DID YOU GET THE IDEA FOR YOUR AWARD WINNING BOOK? I hate to say it, but it just popped into my head. I came up with the idea for the series after the birth of my second son, and spent about 3 weeks mapping out the story, but didn’t start writing it until after the birth of my second daughter, four years later. DOTTY and the Chimney Thief simply follows on from the story set out in the initial book.


WHAT IS YOUR FAVORITE LINE FROM YOUR AWARD WINNING BOOK AND WHY? I love the description of the Vagabond King turning into a flock of birds and flying away. I think it’s creepy and cool! “As he flew he unpieced himself like some sort of horrifying jigsaw, his body disintegrating into a flock of grey-black jackdaws that separated and flew off above the rooftops.”


WHICH OF YOUR CHARACTERS FROM YOUR AWARD WINNING TITLE DO YOU BELIEVE ARE MOST LIKE YOU AND WHY? The main character, Dotty, shares a lot of my personal traits – but I won’t say which ones!


WHAT MESSAGE DO YOU HOPE READERS WILL GLEAN FROM YOUR AWARD WINNING BOOK? It’s not really written with a message in mind – I just hope my readers enjoy it and that it fires their imaginations.


TELL US SOMETHING RANDOM/INTERESTING/FUNNY ABOUT YOUR EXPERIENCE AS A WRITER: I love visiting schools. Children have such imagination and enthusiasm, and they
ask the most random questions: everything from ‘what is your next book about?’ to ‘what are the names of your children?’


IF YOU COULD BE COMPARED TO A WELL-KNOWN AUTHOR WHO WOULD YOU MOST WANT THIS TO BE AND WHY? JK Rowling for her worldwide success; Anthony Horowitz for his versatility; Peter Bently for his clever wit (I love his picture books) and Derek Landy for his sheer comic genius.


WHAT BOOK / PERSON / INCIDENT HAS HAD THE GREATEST IMPACT ON YOUR LIFE? My mother, who repeatedly told me I was special (by this I hope she meant I was talented, and not doomed/damned!).


HOW DID YOU FIND AN AGENT / GET PUBLISHED? I am currently self-published and looking for an agent.


IF A CLOSE FRIEND OR LOVED ONE WANTED TO WRITE A BOOK, WHAT GREATEST PIECE OF ADVICE WOULD YOU GIVE THEM? Get writing! You will never find the perfect moment, so seize whatever moments you have and put pen to paper before you forget what you wanted to say.


CAN YOU OFFER ANY ADVICE FOR WRITERS ON HOW BEST TO PROMOTE THEIR BOOK? Marketing is a very individual thing – what works for some people (and some genres) won’t work for others. For a writer of children’s books it is particularly hard, as with most advertising you are promoting the book to the parents, not the children who will actually read it. The best way to get up close and personal and garner real relationships with a young readership, I would say, is probably through schools and libraries.


WHAT HAS BEEN YOUR GREATEST LITERARY ACCOMPLISHMENT? To date, this award!


WHAT ARE YOUR GREATEST LITERARY ASPIRATIONS? I would like DOTTY to become a household name. My secret ambition is for John Williams to write DOTTY’s theme music ;o)


TELL US SOMETHING PEOPLE MAY NOT KNOW ABOUT YOU THAT THEY MIGHT FIND INTERESTING: I have four children under the age of 9 and until September this year I home schooled them all.


WHAT (IF ANY) OTHER BOOKS HAVE YOU PUBLISHED? Apart from the legal texts, I have written 3 other DOTTY books, all of which are for sale on Amazon, and available in all good bookstores. They are:

DOTTY and the Calendar House Key

DOTTY and the Dream Catchers

DOTTY and the Very Lucky Day


DO YOU HAVE ANY NEW BOOKS IN THE WORKS? I’m working on two more DOTTY books at the moment – the fourth series book, which is called DOTTY and the Mermaid’s Purse, and a cookbook called From Mrs Gobbins’ Kitchen, which complements the series. Mrs Gobbins is the eccentric cook who features in all the DOTTY books, and who is always baking. The cookbook contains a number of the dishes that she serves up in the novels. 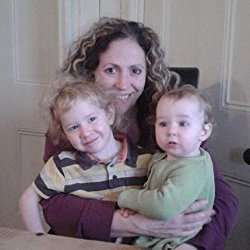