She Yelled I Screamed... She Pulled my Hair! by Tracy Leshay, earns the CLC Seal of Approval 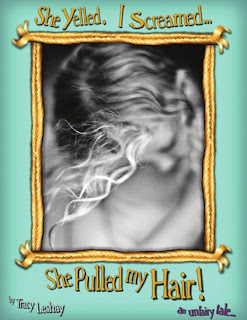 She Yelled I Screamed... She Pulled my Hair! by Tracy Leshay is a wonderfully unfairy-tale-ish story of two sisters who just can't seem to get along.  Whenever Phoebe, the big sister, asks her little sister to share, screaming and hair-pulling ensues leaving Phoebe feeling frustrated and angry. But when she encounters a winged fairy she learns of some magical leaves which the fairy assures her will cure her sister's stinginess.  While the outcome isn't quite what Phoebe hopes for, in time something even more magical occurs.

Written and photographed by Tracy Leshay, this book is not your typical children's fairy tale.  Told in rhyme, each page is  adorned with lovely black and white photographs which, when paired with this enchanting story, help make this book one which little girls will surely treasure.