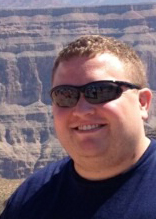 WHEN DID YOU FIRST KNOW YOU WANTED TO BE A WRITER AND WHY?
I wrote my first novel when I was fourteen years old, and I knew even before then that I wanted to be a writer. I loved to tell stories, and there was something extra appealing about the way a novel can captivate a reader and pull them into a world. Nothing else allows people to escape so thoroughly from their everyday lives.
​
AS A CHILD, WHAT DID YOU ASPIRE TO BE WHEN YOU GREW UP?
I wanted to be a Renaissance man and jack-of-all-trades. While the world was getting more and more specific where people might spend their entire lives never branching out of a specific topic, I always craved the chance to dabble in everything. As far as a specific career? I never really wanted to just do one thing.
​
HOW DID YOU GET THE IDEA FOR YOUR AWARD WINNING TITLE?
From my family and friends. I wrote the character Emily in a short story and started to wonder what else might have happened in her life. I imagined the scenes and the discussions and the way they played out, and then I tried to put it all together. It was something different than what I normally write, so I had a lot of fun trying something outside my comfort zone. I feel that it has helped me grow as a writer and develop my style. 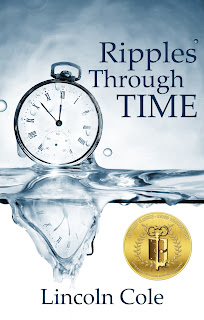 ​
WHAT OTHER BOOKS HAVE YOU PUBLISHED?
​
Graveyard of Empires (Galaxy Science Fiction/Space Opera)
​
Second Chances (the spiritual successor to Ripples Through Time)
​
UAV (Technological Thriller about drone technology and terrorism)
​
Raven’s Peak (Paranormal horror)
​
All of these works are available at http://www.LincolnCole.net
​
TELL US SOMETHING INTERESTING/FUNNY ABOUT YOUR EXPERIENCE AS A WRITER:
One of the ways I add dialogue to a story is by listening to random conversations between people and then tuning it to fit into my novel. I have on numerous occasions had friends and family make mention of a passage in one of my novels that was similar to a conversation I might have had with them months or even years earlier.
​
WHICH AUTHOR HAS MOST GREATLY INFLUENCED YOUR WRITING STYLE?
Stephen King, hands down. I loved his works and read most of them growing up, and the way in which he is able to bring characters to life and put them in front of you is unparalleled by most other authors I’ve read. He doesn’t have the greatest stories, and he certainly can’t rival other literary geniuses who have put together masterful works of art, but his horror is derived from how life-like his characters are and how real they become in our lives.
​
WHAT BOOK HAS HAD THE GREATEST IMPACT ON YOUR LIFE?
This is a tough one because a lot of books have impacted my life. When I’m not feeling like writing or hit with a bout of writer’s block, I like to read and watch television or movies. I don’t like mediocre content, but rather extremely bad or extremely good. Something extremely good makes me think ‘I want to write that well’ and inspires me to pick up my pen again, and something terrible makes me think ‘I can do better than that’ and has the same effect. Mediocrity, though, just leaves me feeling ‘meh’.
​
WHAT HAS BEEN YOUR GREATEST LITERARY ACCOMPLISHMENT?
I can’t say exactly, though I greatly appreciate winning this award from Literary Classics. I have won one other writing award in my life, and that was when I was seventeen and won a writing award for an international magazine. I think, for me, my greatest accomplishment is actually being able to finish a novel and be satisfied with what it is.
​
CAN YOU DESCRIBE THE PROCESS OF BECOMING PUBLISHED AND ANY TIPS YOU MIGHT OFFER FOR OTHER ASPIRING AUTHORS?
Write because you love to write, not because you want to get published or make money. In general, having a publisher can make life easier for making your book available, but the burden of promotion still falls heavily on the author. If you don’t love to promote yourself, than maybe working with an international publisher isn’t what you want. If you are hoping to have a personal conversation with your audience, maybe self-publishing is what you are really after. It’s more work on your part, but it lowers the burden, removes deadlines, and makes the experience more enjoyable.
​
CAN YOU OFFER ANY ADVICE FOR WRITERS ON HOW BEST TO PROMOTE THEIR BOOK?
Don’t be afraid to experiment with different tactics. You’re going to try a lot of things that don’t work, and occasionally something will perform way better than you had hoped. Also, be patient, because it takes a lot of time to get your book into different channels and in front of people. If it’s good, then word of mouth will take you a long way. Also, writing competitions and awards can help set you and your book apart, so put yourself out there.
​
IS THERE ANYTHING ELSE YOU'D LIKE TO SHARE WITH OUR READERS?
Writing is a journey of self-discovery. Sometimes you have to look inside yourself to find a story and sometimes it’s outside waiting for you to pick it up and run with it. Don’t be afraid to try something different, whether as a writer or in your life, because you never know just what will inspire you.
​
DO YOU HAVE ANY NEW BOOKS IN THE WORKS?
I have a tendency to start new works when I finish a project and move on from genre to genre. So far I’ve written literary fiction, science fiction, espionage thriller, paranormal horror, and I’m finishing up a fantasy work I’m hoping to have published in the near future. Four of these are new series where I’ve started something and have to continue, so now I’m going to turn my attention toward second books in each of these series. I just enjoy starting new books with a blank slate so much that it’s hard for me to dive back into something with so many moving parts.
​
All of my works can be found through my website and on amazon:
​
I also have a lot of exclusive content, including chapters from each of my works and upcoming content. I also like to do giveaways and anyone who subscribes to my mailing list is eligible for weekly giveaways including free copies of my novels, upcoming sample copies of new works, and other great prizes!