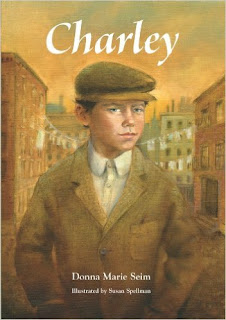 Charley might be street-smart, but he also has a tender heart.  Life in the early 1900s is hard on most everyone it seems, and Charley is no exception. He lives in a tiny run-down apartment with no running water along with his two younger siblings, an older brother and their father, who hasn't been able to hold a job since his mother's death. Charley's father concludes the best he can do for his kids is give them an opportunity to find a home with a good family while he finds work.  So he leaves a note with Charley's oldest brother asking the Home for Little Wanderers to take in the three youngest siblings.  Twelve year old Charley is pretty sure he can get along just fine continuing to steal bread on the streets to make do, but his older brother encourages him to stay with his siblings so they'll all be together.  With a compassionate heart he begrudgingly agrees to go with little Minnie and Clarence to the orphanage.

Author Donna Maries Seim vividly depicts the story of a young boy's hopes, fears and dreams as he struggles to find purpose as an abandoned half orphan.  History buffs will appreciate this book for its authenticity.  And this genuine story is sure to work its way into the hearts of readers of all ages.

An excellent selection for home and school libraries, Charley, comes highly recommended and has earned the Literary Classics Seal of Approval.