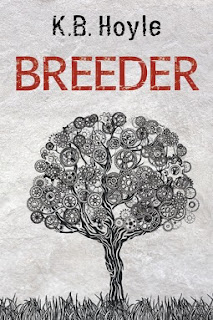 Number 17 (named Pria by her childhood friends) has been experiencing vague, dreamlike visions, coupled with mild depression.  She knows she's not supposed to ask questions, but she just can't help herself.  Did she really see a man in the breeding compound?  Surely it must have been a dream, since men are not allowed anywhere near the women selected for their traits of genetic perfection to repopulate Gaia Earth.  As she seeks to find answers without appearing to be too inquisitive, she begins to question the validity of the Unified World Order's take on the value of humanity.  Yet, her entire life she's been trained to believe that, through the controlled population program, the UWO has created a world devoid of imperfection.  Her role in making this happen is paramount and it is an honor and a privilege to carry out this task.

Author K.B. Hoyle's Breeder is a dystopian treasure.  With characters that are genuine and quite tangible, the story nearly leaps off the pages of this book which expertly holds the reader's attention from the first page to the last.  This book will appeal to a broad audience and is highly recommended.