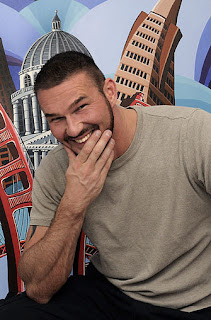 HOW DID YOU GET THE IDEA FOR YOUR AWARD WINNING BOOKS?

“The Language Thieves”: I have studied many languages in my life, and I often wondered what happens when languages die out. So I came up with an alternative explanation in my book “The Language Thieves.” Having travelled to Ireland and Scotland a few times, I combined my love for these places with my passion for languages. All this mixed together with some science-fiction and fantasy allowed me to create the world of the Cerebrals, a tribe that steals languages out of people’s minds on a remote island in Scotland.
​
“The Golden Maple Tree” is the second book in the Magora series. The entire series was inspired by my job as a painter. I often wondered what would happen if you could jump inside a painting. This became the premise for this series that has won over 15 awards already.
​
WHAT IS YOUR FAVORITE LINE FROM YOUR AWARD WINNING BOOK AND WHY?

“Painting and writing are both products of creativity. Even though the two seem different, they are more similar than we think.” The Gallery of Wonders (Book 2, Magora series)
​
I enjoy both, painting and writing. Over the years I have discovered that there are more similarities between the two than expected. This quote sums up nicely the underlying theme of the series.
​
WHICH OF YOUR CHARACTERS FROM YOUR AWARD WINNING TITLE DO YOU BELIEVE IS MOST LIKE YOU AND WHY?

There is no particular character that is exactly like me, but each character contains features similar to mine, just like each character has traits of some of my friends and family.
​
WHAT MESSAGE DO YOU HOPE READERS WILL GLEAN FROM YOUR AWARD WINNING BOOK?

I think anybody who loves languages or has grown up bilingually will find “The Language Thieves” interesting. It tells the reader that you can equally enjoy two languages without having to give up one for the other.
​
WHAT INSPIRED YOU TO BECOME A WRITER?

I started as a painter and illustrator. It was only through picture books that I realized I was also gifted enough to tell stories with words and not just through pictures. One of my art college instructors was the first to inspire me to go into writing.
​
WHO HAS HAD THE GREATEST INFLUENCE ON YOUR WRITING STYLE?

Most of my teachers and editors have influenced me. I had my first children’s literature classes at the Institute of Children’s Literature. Starting over 15 years ago, I was influenced by their edits.
​
TELL US SOMETHING ABOUT YOUR EXPERIENCE AS A WRITER:

I am working on translations of the Magora series. I just finished the German version and worked with a Mexican translator on the Spanish version. The Mandarin version is almost completed as well. This made me realize how difficult translations can be. A good example is the name of one of the magic stores in Magora: “The Wrinkle Dimple Skincare Shop.”
​
Keeping both, the rhyme and the funny meaning is really difficult and can’t be literally translated. In German it turned out to be “The Wrinkle Smiling Beauty Salon,” in Spanish the “Beauty Salon for the Pretty Woman with Grandness,” and in Mandarin it became, “I-want-to-be-so-beautiful makeup shop.”
​
TELL US A LITTLE ABOUT YOUR WRITING PROCESS:

I am a big planner. I usually don’t start writing until I have a detailed outline. This can turn out to be longer than some chapters. Once the outline is completed most creative work is done. After that, I feel that it is more about execution and craftsmanship than about creativity.
​
WHAT IS YOUR GREATEST CHALLENGE AS A WRITER?

Marketing and business! As a painter and writer I have never studied marketing or business. However, this is a very important part in an independent writer’s life. Since I don’t really understand well how things in this field operate, it is one of my biggest challenges in this industry.
​
IF YOU COULD BE COMPARED TO A WELL-KNOWN AUTHOR WHO WOULD YOU MOST WANT THIS TO BE?

Doctor Seuss has always been a big inspiration to me. I think his creativity is unrivaled in children’s literature. It would be an honor to be compared to him. However, my middle grade series “Magora” is mostly compared to Harry Potter.
​
HOW DID YOU GET PUBLISHED?

I didn’t find an agent because I never invested much time finding an agent or publisher. With Amazon having taken 50% of the American book market, there is no need for agents or publishers anymore. I self-published my books under “Misty Moon Books” and have been selling through Amazon. However, I am always open to agents and publishers. But so far I have not been approached by any.
​
CAN YOU OFFER ANY ADVICE FOR WRITERS ON HOW BEST TO PROMOTE THEIR BOOK?

Promotion is a real challenge. As I have mentioned above, I am not an expert in marketing and business. Most of my promotions go through Amazon and Social Media. So I don’t really know more than anybody else does.
​
WHAT HAS BEEN YOUR GREATEST LITERARY ACCOMPLISHMENT?

Having finished the middle grade fiction series “Magora” has been my greatest literary accomplishment. The six volumes of the series build upon each other. It required 20 years of planning and writing to complete it. The fact that the series has won so many awards added to the accomplishment of this series.
​
WHAT ARE YOUR GREATEST LITERARY ASPIRATIONS?

Being a full-time painter, it is a challenge for me to find time to write as all. So my literary aspirations are mainly about finishing up the six children’s books that I still have in my mind.
​
TELL US SOMETHING PEOPLE MAY NOT KNOW ABOUT YOU THAT THEY MIGHT FIND INTERESTING:

I lived in the US, Germany, Japan and Honduras. I spent a long time with the Native Indians in the Mosquito Coast, studied Cultural Anthropology and have traveled to over 60 countries. I love parrots, have no children and love eating chocolate.
​
IS THERE ANYTHING ELSE YOU'D LIKE TO SHARE WITH OUR READERS?

I am currently working on a young middle grade book with the working title “The Giant Chocolate Clouds.”
​
“The Giant Chocolate Clouds” is about Henry, a boy living in a town called Chocolocoville, where his family owns clouds made out of chocolate. One day these clouds have disappeared, and Henry goes on a journey through a world of candy to find them.
​
You can always check on my website to find updates or sign up to my newsletter.
​