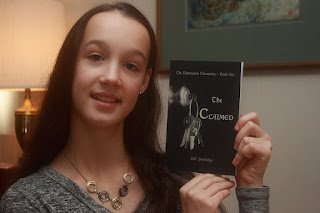 The CLAIMED (The Dimension Chronicles – Book One)

HOW DID YOU GET THE IDEA FOR YOUR AWARD WINNING BOOK? Years ago, I began writing a story about a girl in an orphanage in New York who was taken away by a mysterious woman named Jerra. Like most stories that I have not planned out, this story snippet went on my shelf and was forgotten – until one day, when I was cleaning off my shelf, just before I turned thirteen. I found the little notebook, and, intrigued by the beginning of the story, brainstormed for ideas as to where I could take it. The CLAIMED, as well as the books that follow in my series, are a result of my brainstorming.

WHAT IS YOUR FAVORITE LINE FROM YOUR AWARD WINNING BOOK AND WHY? “‘Magic…’ Hazel’s voice sounded dazed. ‘I would say you’re crazy—that’s an absolutely ridiculous answer.’” (From “Chapter 21: The Last CLAIMED”.) Hazel’s bewildered statement encompasses much of the emotion felt by the characters throughout book one. In this book, many of the CLAIMED are yanked away from everything they’ve ever known into another Dimension, where they become part of things they could never have imagined. This often makes them confused and/or doubtful.

WHICH OF YOUR CHARACTERS FROM YOUR AWARD WINNING TITLE DO YOU BELIEVE IS MOST LIKE YOU AND WHY? All of the characters, to some degree, are based on me (otherwise it would have been impossible for me to write them). This said, the character most like me is probably Grace.

WHAT MESSAGE DO YOU HOPE READERS WILL GLEAN FROM YOUR AWARD WINNING BOOK? Throughout the book (and the series), Grace is often plagued with things she does not understand. In spite of her intense desire to know what is going on, she rarely discovers the answers immediately – and some answers are never given to her. Even though the book is centered around Grace, she doesn’t know what everything is pointing to until quite a ways into the story. This is the way it is with us, too. The Lord has a plan for our lives. We may not know where He is taking us all of the time, but everything in His plan is working together for the good of those who love Him and who are called according to His purpose.

WHAT INSPIRED YOU TO BECOME A WRITER? I have always loved to read, so writing came naturally to me. I attempted to write my first “book” when I was six, waiting for our vehicle to be fixed at a car repair shop. Ever since, I have been writing, but The CLAIMED was my first published title.

WHO HAS HAD THE GREATEST INFLUENCE ON YOUR WRITING STYLE?  Probably K.B. Hoyle. She is an author that not everyone knows about, but ever since I first read her series, The Gateway Chronicles, she has been my favorite author. I have read all of her books multiple times, often in a row, so my style has gained some similarities to hers.

TELL US SOMETHING ABOUT YOUR EXPERIENCE AS A WRITER: All of the pictures on the covers of my books were taken at my house by my father. We then uploaded them to the computer, where we used Photoshop to turn them into book covers.

TELL US A LITTLE ABOUT YOUR WRITING PROCESS: I begin every story with a three-part outline. The first part contains the setting and characters, the second part contains the main problem of the story, and the third part contains the resolution. Only after I have figured out these three main points do I fill in the details and then write my story.

WHAT IS YOUR GREATEST CHALLENGE AS A WRITER? I have found that it is much easier to begin a story than to wrap one up – especially a series. However, I do use an outline, something I was very thankful for when finishing The Dimension Chronicles.

IF YOU COULD BE COMPARED TO A WELL-KNOWN AUTHOR WHO WOULD YOU MOST WANT THIS TO BE AND WHY? C.S. Lewis. I love his work (especially The Chronicles of Narnia, which I have read countless times), and his writing style has heavily influenced mine.

HOW DID YOU GET PUBLISHED? I am self-published through Kindle Direct Publishing. When I was looking into ways to get published, KDP was what I needed at the time.

CAN YOU OFFER ANY ADVICE FOR WRITERS ON HOW BEST TO PROMOTE THEIR BOOK? Promotion is one of the hardest parts of being an author (especially a young author, like me), but I have found that talking to people face to face can be a lot more powerful than connecting on social media. Talk to people about your books!

WHAT HAS BEEN YOUR GREATEST LITERARY ACCOMPLISHMENT? Publishing my entire trilogy in one year was definitely a big accomplishment. Each of the books took at least one year from the time I first put pen to paper until the publication date, but I was able to overlap the process of writing each book, so that while book one was being edited, I was writing book two. In this way, I was able to publish them all in the same year.

WHAT ARE YOUR GREATEST LITERARY ASPIRATIONS? I want my books to do well (as every author does), but I would rather have the few who read my books enjoy them than have innumerable people read them and think them dull. Because of this, I put a great deal of energy into my writing and editing, trying to make my stories as captivating as I possibly can.

TELL US SOMETHING PEOPLE MAY NOT KNOW ABOUT YOU THAT THEY MIGHT FIND INTERESTING: In addition to writing, I love ballet and crocheting. I may spend up to twenty-two hours in the ballet studio a week working on my technique and artistry.

IS THERE ANYTHING ELSE YOU'D LIKE TO SHARE WITH OUR READERS? My books are written for a middle school/early high school audience, but if you have an advanced younger reader, there is nothing in my series that is inappropriate for a younger audience.

WHAT OTHER BOOKS HAVE YOU PUBLISHED? The CLAIMED is book one in my trilogy, The Dimension Chronicles. Books two and three (The Lost Script and The Destiny) are now also available on Amazon.

DO YOU HAVE ANY NEW BOOKS IN THE WORKS? I am currently working on a historical fiction novella set before and during World War One. The book is written as a series of letters between several girls over the course of eight years (1910-1918).