The Princess and the Rogue The Tears of Hathor, by Richard J Johnson, earns the Literary Classics Seal of Approval 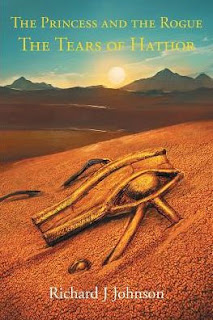 Princess Li is the youngest of three children, all girls. Sadly, her mother passed away while giving birth to her. So grief-stricken was the emperor at the loss of his bride that he went into a great depression. Try as he might, he could not seem to control his incessant crying. His constant weeping made him appear weak before those in his kingdom and he soon began to lose the respect of his followers. Seeking the help of a witch, he implored her to conjure a spell to cure his malaise. But when she does, a new problem arises in the form of a very unfortunate curse upon their land.

Years later Li grows into a confident young lady. Determined to help her father and their kingdom, she sets out on a quest to reverse the curse that has befallen their land. Along the way, she meets Aramis, a young man whose unfortunate circumstances have led him into a life of thievery. The two make quite an unlikely pair as they join efforts to find the fabled Tears of Hathor which Li believes may be the key to saving her kingdom.

Author Richard J Johnson has crafted an entirely entertaining and altogether charming tale which is sure to enchant young readers. The characters of Li and Aramis are well developed, and their back-stories help readers establish a connection with our protagonists who are both likeably flawed. Exciting plots and unexpected sub-plots keep this book moving at an enjoyable pace. Ending on a cliff-hanger, which is most assuredly intended to set the stage for the sequel to this book, The Princess and the Rogue, The Tears of Hathor, by Richard J Johnson is highly recommended for home and school libraries and has earned the Literary Classics Seal of Approval.