The Other Side of Freedom, by Cynthia T. Toney, earns the Literary Classics Seal of Approval 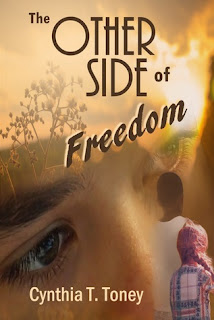 Sal Scaviano is a teenaged boy growing up during the days of prohibition.  His family hails from Italy and has settled in a town called Freedom.  Their life in the new country represents all his family has worked and sacrificed for to offer hope for a greater future.  The Scavianos have worked hard to grow their small farming business.  They are not wealthy, in fact, at times they've had to do without.  But they have earned the respect of those in their community and in their field of work.

One day Sal overhears an argument between his father and uncle, and a gang of Italian mobsters.  It seems there's money to be made in bootlegging now that prohibition is in place.  The mobsters need local connections and want to involve Sal's family.  Despite his family's resistance, they are forced into the mobster's scheme and when they do the results are devastating.  Sal and his best friend, Antonina, do their best to clear his family's name.  But doing so proves to be more challenging than they ever could have imagined.

Author Cynthia T. Toney has crafted a riveting coming of age novel which skillfully blends this tale with the historical elements of that era.  As the young man struggles with knowing whom he can and cannot trust he learns the blurred lines between right and wrong are not always so easy to discern. Toney's The Other Side of Freedom is a powerful story that will resonate with readers of all ages.  Recommended for home and school libraries.