The Stone of Mercy, by M.J. Evans, earns the Literary Classics Seal of Approval 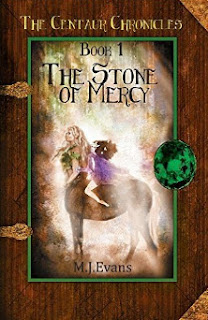 While she was yet unborn, Carling's mother received a prophecy that her child would one day become the long-awaited ruler of Crystonia. The throne, having remained unclaimed for over a century and a half, had been unsuccessfully sought by many throughout those tumultuous years. When Carling is just 16 years old she is met by a wizard who pronounces that she is the chosen one.  A sweet girl, from a humble background, she is overwhelmed by this revelation as she is presented with a quest; complete a magical breastplate by finding the four stones needed to fully harvest the power within this magnificent shield.

The Stone of Mercy, by M.J. Evans is a marvelous tale of centaurs and ogres who battle against one another for control of Crystonia.  As Carling matures she exhibits strength and compassion, all the while remaining focused on her calling.  Despite doubts from those in the village where she has grown up she is steadfast in her quest to complete the tasks set before her.  Joined by a delightfully eclectic group of friends, Carling is not alone as she dares to do what none before her have accomplished for over a century.  This captivating book will enchant readers with tales of adventure, excitement, humor, and hints of a pending romance.  The Stone of Mercy is recommended for home and school libraries and has earned the Literary Classics Seal of Approval.