The Sword of Telemon, by Murray Lee Eiland Jr., earns the Literary Classics Seal of Approval 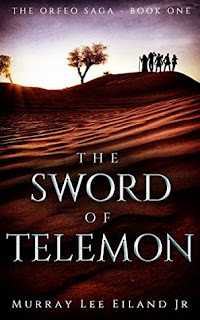 Orfeo, a prince and the younger brother to the king's heir, is ransomed as a young boy to a neighboring kingdom.  Raised in the teachings of a wise philosopher, he eventually escapes and returns home in shame, having broken a treaty as well has having become too much like his captors in mannerisms and thinking. Having little contact with his royal family, Orfeo lives the life of a lowly shepherd.  But when his brother, the heir, is captured and believed to have been forced into slavery, Zurga, a respected advisor, persuades the king to include Orfeo in the search party.

Orfeo and Zurga join forces with Telemon, a mighty warrior, and Orton, Telemon's trusted fighting companion.  Together, the four journey to Pylos, in hopes of returning with the heir.

Murray Lee Ieland Jr.'s The Sword of Telemon, book one in the Orfeo Saga, is a gripping novel.  Set in ancient Greece, and interspersed with cameos of myths,  legends, and historical events, this is an enticing read which builds in intensity as the story progresses.  With a genuinely flawed cast of characters, the author regales readers with a tale of honor and courage, in which an unlikely band of brothers learn they all can benefit from the wisdom and experience of the others in their group.  Philosophers and poets join forces with fierce warriors in this compelling story that won't soon be forgotten.