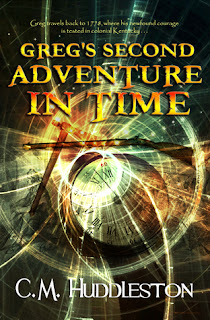 Greg, a bright, inquisitive and extremely talkative young boy, is not at all pleased when his family moves to Kentucky for his father's job.  He would prefer to be spending his summer with his best friend, Rose.   But instead, his mom has volunteered him to participate in an 18th century reenactment in which he must wear a period costume that is far from comfortable.

Greg has traveled in time before, but he's not quite sure how.  So, when he finds himself once again back in time, surrounded by five Indians with tomahawks and war paint, he's not entirely sure what to make of the situation. Having learned a thing or two from his previous time travel experiences, he's less afraid and better equipped to maintain a sense of calm as he faces the Indians who have just killed and scalped a man bearing a satchel with letters dated from the summer of 1778.

Author C.M. Huddleston's Greg's Second Adventure in Time brings history to life as Greg explores our country's new frontier in colonial Kentucky.  Action and adventure abound in this deliciously entertaining read that is likely to spur a keen interest in young readers, as history takes center stage in the continuation of this delightful series.  This book is recommended for home and school libraries and has earned the Literary Classics Seal of Approval.