The Whizbang Machine, by Danielle A. Vann, earns the Literary Classics Seal of Approval 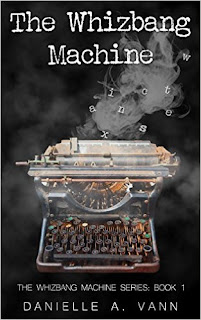 Elizabeth is an extraordinarily mature fifteen year old girl.  Of course, her life circumstances have caused her to grow up faster than most kids her age.  An only child, her father passed away a few short weeks after her grandmother's death.  So when her grandfather, bereaving and heartbroken, escaped reality to travel the world, she and her mother were left to pick up the pieces of their lives on their own.  Now, eight years later, Elizabeth's grandfather has returned home with a mysterious typewriter which he believes is somehow connected to his family, and in particular, to Elizabeth.

The Whizbang Machine is an incredibly suspenseful book which will have readers of all ages eagerly turning pages with enthusiasm as they wait to see what will become of Elizabeth and her eccentric grandfather, Jack.  Author Danielle A. Vann displays rare talent as a story-teller in this thrilling book which will leave readers anxiously awaiting the sequel to this delightfully engaging read.

The Whizbang Machine is highly recommended for home and school libraries and has earned the Literary Classics Seal of Approval.