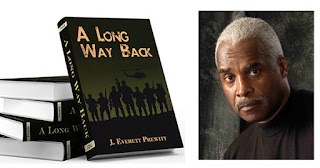 WHEN DID YOU FIRST KNOW YOU WANTED TO BE A WRITER AND WHY?
When I was young, I didn’t read many positive books about black families. None of the books represented my experience growing up with a strong and accomplished mother, father, aunt and uncles. After videotaping my parents one year, I was inspired to write a fictional book, Snake Walkers, about a black family that overcame insurmountable odds because of their commitment to each other.
​
AS A CHILD, WHAT DID YOU ASPIRE TO BE WHEN YOU GREW UP?
I wanted to be businessman. I didn’t know what, but I majored in business and eventually became president of my own company.
​
HOW DID YOU GET THE IDEA FOR YOUR AWARD WINNING TITLE?
Returning from war is both a physical and a mental journey. The title, A Long Way Back, relates to both.
​
WHAT IS YOUR FAVORITE LINE FROM YOUR AWARD WINNING BOOK AND WHY? “It’s funny how just a few minutes in your life can dictate your whole future.” In a number of instances in the book, spur-of-the-moment decisions resulted in long term consequences and even death. In this particular setting, Colonel Bertram killed his wife in a fit of rage resulting in his imprisonment for life.
​
WHICH OF YOUR CHARACTERS FROM YOUR AWARD WINNING TITLE DO YOU BELIEVE ARE MOST LIKE YOU AND WHY?
Raymond Williams, a former army officer, plays a minor part in this story. He played a larger role in my first book, Snake Walkers. However, I had a war experience similar to Anthony Andrews.
​
WHAT MESSAGE DO YOU HOPE READERS WILL GLEAN FROM YOUR AWARD WINNING BOOK?
For a group to overcome obstacles, you must unite and agree on a plan of action that allows you to succeed.
​
TELL US SOMETHING INTERESTING ABOUT YOUR EXPERIENCE AS A WRITER:
In college, I used to write compositions for my roommate. He received a B grade from the course; I received a C.
​
WHICH AUTHOR HAS MOST GREATLY INFLUENCED YOUR WRITING STYLE?
The book that most influenced me was The Writer’s Journey, by Christopher Vogler. His influence was more about structure than style. I became so engrossed in the book that I missed a plane coming back to Cleveland.
​
WHAT BOOK HAS HAD THE GREATEST IMPACT ON YOUR LIFE?
The African Origin of Civilization by Cheikh Anta Diop. This book encouraged me to read further about Africans and their accomplishments and enlightened me about Africa’s place in world history.
​
WHAT HAS BEEN YOUR GREATEST LITERARY ACCOMPLISHMENT?
I won a number of awards for Snake Walkers, but finishing behind Amy Tan in a literary contest was a highlight.
​
DO YOU HAVE ANY WRITING RITUALS?
When I’m stalled, I read books similar to mine, or I read a book about writing. I typically write in the morning, but sometimes when an idea emerges, I’ll write whatever time it is.
​
HOW DID YOU GET PUBLISHED? I was never good at soliciting, so, I created my own publishing company and financed the creation and marketing of both my books.
​
WHAT DID YOU DO TO CELEBRATE THE PUBLISHING OF YOUR AWARD WINNING BOOK?
I’m pretty laid back, so I made an announcement to my family and friends, drank a few glasses of Pinot Noir and went to sleep.
​
CAN YOU DESCRIBE THE PROCESS OF BECOMING PUBLISHED AND ANY TIPS YOU MIGHT OFFER FOR OTHER ASPIRING AUTHORS?
Write because you are passionate about your story, not because you want to make money. If the novel is good enough, the money will come. If not, you have added another footnote to your legacy.
​
CAN YOU OFFER ANY ADVICE FOR WRITERS ON HOW BEST TO PROMOTE THEIR BOOK?
An inordinate amount of time is required to promote. Create a website, blog, and e-mail; draw reader’s attention to your writing during the development of your book, be prepared to invest both time and money in continual promotion. Learn the art of promotion as you have the art of writing. Do not think that because you have a great book it will sell itself.
​
IS THERE ANYTHING ELSE YOU'D LIKE TO SHARE WITH OUR READERS? Everybody has a story. The key to a good novel, though, is writing a story that others want to read.
​
DO YOU HAVE ANY NEW BOOKS IN THE WORKS?  My next book, Something About Ann, is a novella with short stories that pertain to each of the characters in A Long Way Back after the war is over.