I Will Breathe earns CLC Seal of Approval 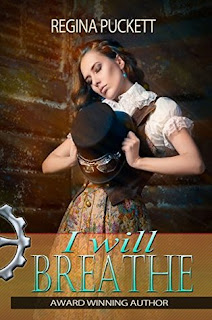 I Will Breathe is the post apocalyptic story of Liberty, a young girl who is born eight hundred years after a great war which has decimated the planet.  She is raised by an adoptive father from whom she learns the cut-throat business of trading.  But after her father's death she is alone in the world to fend for herself.  She carries on with the only life she has ever known, living in the steam-powered air balloon which she inherited. Trained from an early age to be wary of others, she travels the continent in solitude.  In time though, her life becomes full when she meets a robot, named Boy, who speaks and thinks like a human.
This book starts out a bit slowly but escalates into a captivating story that will keep readers engrossed clear through to its winning finish.
Well developed characters help readers to connect with Liberty and her growing entourage. This book is highly recommended.