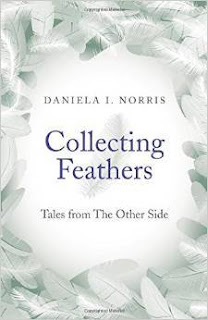 The book Collecting Feathers, by Daniela I. Norris, is a collection of eleven short stories about people who have passed over to the “other side”.  But long after they've gone, the deceased still linger within the land of those still living. Each story explores the themes of life, time, and death while offering a glimmer of hope for those left behind living with grief. This book is a great read and flows easily. The author does a terrific job of casting the hook, and reeling the reader in.

In the first story, the main character, “Ollie”, was finally being released from a mental institution after many of years. Ollie was planning on killing himself with sleeping pills which he had been storing up for some time.  But then, as if by fate, he met a kind, old women. He carried her suitcases home, and was invited in for tea. He soon learned that the woman's son and father had killed themselves in the same way that he had planned. He fell asleep on her couch and “met her son” in a dream. Her son asked Ollie to take care of his mother until she passed away, giving Ollie a reason to live.

Another great story in the book is a story called “Clockworks”. It is an inventive story where watches made in Switzerland begin slowing down due to physic experiments going on at a collider at CERN.

The best story in the book was “Repent” It is a great story about a character named Paulo who tries to dig himself out of a proverbial hole which he's dug for himself.

The stories span many time periods and cultures, and the author does an amazing job bringing these stories to life.  It is clear that a lot of research went into achieving these great stories.

Collecting Feathers is highly recommended and has earned the Literary Classics Seal of Approval.