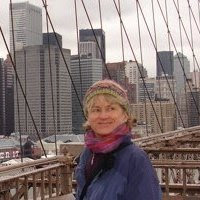 HOW LONG HAVE YOU BEEN WRITING?: My first historical novel, Jenny of the Tetons, was published in 1989 by Harcourt, but before that I was a book reviewer and columnist for the Los Angeles Times, and a newspaper reporter.

WHAT INSPIRED YOU TO BEGIN WRITING?: At age ten I loved to make up whoppers, but my parents helped me channel that imagination into story-telling. My first rejection was at age eleven from Whitman Publishing Company for my poem, "Valentine's Day," which had been pencilled on notebook paper during math class. Now that I look back on it, hoping to get published was pretty brave for a kid! I had no idea it was to be the first of many hundreds of rejections.

WHAT WAS THE INSPIRATION BEHIND YOUR AWARD WINNING TITLE, STALKED?:     When I learned that my Danish great-grandfather spent much of his life in an insane asylum in Wisconsin, my mind raced. How did this young man hoping for a new beginning in America end up "criminally insane?" What was he like when he stepped off the ship from Copenhagen and how did he get by the strict medical examiners on Ellis Island?
After visits to this Island of Tears and several years of research and writing, my story is finished. This young adult novel didn't turn out as I had originally planned.  --Fellow writers, I know you understand this!  --But it was birthed by those questions of how and why. Coupled with family lore that my great-grandmother worked in the Danish royal palace before immigrating to America, well, here we are! The setting is 1912, in the Lower East Side tenements of New York City. Cover art and interior illustrations are by my son, Cody Rutty. 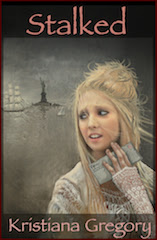 HAVE YOU PUBLISHED ANY OTHER BOOKS ?
Yes, thirty-plus titles are listed here

DO YOU HAVE ANY NEW BOOKS IN THE WORKS?
I'm finishing #7 of the Cabin Creek Mysteries series, for readers ages 7-10. The Phantom of Hidden Horse Ranch will be available early 2013. Details will be on my Amazon author site.

TELL US A LITTLE ABOUT YOURSELF: I grew up in Manhattan Beach, California two blocks from the ocean but have lived in New Mexico, Colorado, Utah, and now Idaho, so you could say I'm a Western girl. My husband I have been married 31 years and we have two adult sons, two golden retrievers, and a ton of books! Every morning I read the Bible in French. My website with more info is:  www.kgregorybooks.com

TELL US SOMETHING FUN THAT OUR READERS MIGHT FIND FASCINATING ABOUT YOU: When I was a ski bum in Mammoth Lakes, California, early 1970s, I was an extra in the movie, "The Other Side of the Mountain," which was being filmed in part on the sunny ski slopes there. My girlfriend and I were eating dinner in a restaurant bragging to a nice man about how we were in the movie and blablablabla. He bought us some drinks and listened to our boasts. The next morning when she and I showed up on the set, we saw this gentleman talking to the film crew. He was the star, Beau Bridges!

WHAT DO YOU MOST ENJOY DOING IN YOUR SPARE TIME?  Hanging out with family and friends, walking our big furry dogs, reading, daydreaming. I'm a swimmer, too.

WHAT CHALLENGES DO YOU FACE AS AN AUTHOR?: Loneliness and discouragement. Now and then I muse about life as an author here.

DO YOU HAVE ANY ADVICE FOR OTHER ASPIRING AUTHORS?: Every person has a unique story that only s/he can tell. If it's in your heart, write it down and don't give up.

IS THERE ANYTHING ELSE YOU'D LIKE TO SHARE WITH OUR READERS?: Writing every day is like a musician practicing scales. The daily effort hones the craft, ultimately--and hopefully--creating a work of beauty.