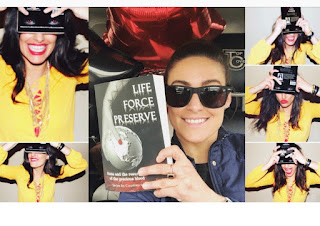 WHAT INSPIRED YOU TO BECOME A WRITER?
I always wanted to write a novel one day but didn’t know what I’d be writing until I was on bedrest for nearly two years from a distracted driver. June of 2016 I was rear-ended at 55mph while I was at a dead stop, suffering serious neck and back injuries. My previous normal routine after work would have been running long distance, rock climbing, and volleyball to list a few. Sometimes I’d do two of the three in one day, so it was difficult for me to face bedrest for an extended period. Several months in my depression was swallowing me whole and I was willing to try anything that would help with inflammation so I could get back to life. One of my best friends suggested trying the “blood-type diet.” I found my blood type on one of my hospital forms but when I google searched it, I saw pages upon pages of creepy conspiracy theories claiming I had “alien blood” along with other bizarre websites. I spent close to a year researching the topic and saw there were not really a lot of books on the topic of the RH-negative bloodline. My brother suggested I start writing as an outlet. I had back surgery April of 2017 and when I got home, I started pouring everything into my first novel; Life Force Preserve; Anna and the Resurgent of the Precious Blood. I was in a very dark place in my life and after so much pain and time continued to pass, I didn’t know when or if I’d ever get back to life. Therefore, I daydreamed about a series that would allow me to help others through relatable traumatic life events as well as allow me to research locations and settings from around the world— places that would keep my mind occupied and potentially visit when I was healthy again. The Life Force Preserve series will have eight “character books”, where my readers are inside the minds of each character and in each country. Each novel takes place at the same moment in time from the various countries. Once the character series are complete, the characters from each novel will be brought together for the main, three-part series. I’m hoping to have an interactive audience where I’d like to poll them on which country the next character will be from, among other ideas, which I’d like to implement interactively with my readers. It’s important for me to get readers involved through my writing process as I grow as an author—they’re important to me and including them in the book development phase will be fun!

DO YOU HAVE ANY QUIRKY OR FUN WRITING HABITS? Not sure my publisher would want me sharing this, because I may sound like a weirdo and we laugh at this. But, I have a bizarre way of writing. I’m sure a lot of authors prefer sitting somewhere with a view and I’m as opposite as one can get from a scenic view. I’ve tried it recently and I knew it wasn’t my thing. First, I must be sitting in complete darkness and I’ll light a candle or two. I have to wear earplugs and will play a scary movie in the background—which I keep muted. Not sure why I have to have a scary movie on because it’s not like I’m watching it and not sure why I wear earplugs, because the movie is always muted. I think I like the dark, so I can build a colorful scene around me and see it without distractions around the room. I’m a pantser and this is the best way for me to develop a scene. As for the scary movie, I tend to gravitate towards Stephen King’s films and other books that have turned to film, so I believe I do this as a motivator. If I slow down, I’ll look up and see the hard work of another dedicated writer which inspires me to keep going, especially during the later chapters of the book.

WHAT IS YOUR FAVORITE LINE FROM YOUR AWARD-WINNING BOOK AND WHY? I’m not sure why, but I remember laughing so hard when writing this line... the Shrek part of this sentence from Chapter 4. I had a post-op herniation in my lower back and had to take a break from writing this scene because laughing hurt my back so badly. I guess it’s the first line that comes to my head. Leading up to my back surgery, my nerves on both sides were severely compressed where I was unable to walk without applying pressure to the bottom of both butt cheeks and this is how I felt I looked when I’d have to be in public. "To an onlooker, I’m sure I stand out. Most women in their early twenties wouldn’t be out in freezing climates, staggering down a sidewalk, unless they’re coming home from a crazy all-nighter. I’m walking down the sidewalk like Shrek after eating a jar of bath salts. The sun’s barely up, and I’ve scared a pedestrian—good for you, Anna."

WHAT MESSAGE DO YOU HOPE READERS WILL GLEAN FROM YOUR AWARD-WINNING BOOK? Aside from the relatability when it comes to grieving through different hurdles in life, there may be more to blood types than we think.  Not many people even know what their own blood type is. Scientists discovered there being an RH-positive (85% of the world) and RH-negative blood (15% of world) as recent as the 1930s, after patients would get sick from blood transfusions. We may have only scratched the surface with what the proteins in varying blood types are capable of. The month my book went into production, the New Nork Times released an article on blood proteins and HIV cures, which I actually used as an example in my book. Note: the Delta 32 gene is the same as the CCR5.  What I wrote: “My colleagues and I were working on serums derived from the CCR5 Delta protein found in an Interhybrid’s blood. My division specifically worked on a treatment and cure for the HIV virus. Individual departments are created at headquarters for virus-specific strains, and I was assigned to the HIV virus.” “There’s a cure for the HIV virus?” “Yes, it’s in the middle stages of testing for approval.” Cindy hands me a plate. “How on earth did you link blood types to virus cures?”

IF YOU WERE STARTING YOUR JOURNEY AS AN AUTHOR TODAY, WOULD YOU DO ANYTHING DIFFERENTLY? I would have started marketing from the very beginning. It’s another hat to wear while writing a draft, but it’s an important one.

WHAT IS YOUR GREATEST TIP FOR ASPIRING AUTHORS? Don’t give up. Write everyday. Network, encourage, and spend time with fellow authors, as they can relate to the different stages of writing. Also, I’m not sure I believe in writer’s block. I believe if I’m stuck, it means I’m not happy or bored with what I last wrote and may need to go back and throw a twist instead.

CAN YOU OFFER ANY ADVICE FOR WRITERS ON HOW BEST TO PROMOTE THEIR BOOK? It sounds strange but start promoting your book from the early stages. It will help you stay on course. Take advantage of having free sources such as social media.

WHAT HAS BEEN YOUR GREATEST LITERARY ACCOMPLISHMENT? As a new author, I would say completing my first novel and publishing it. I accomplished one of my life goals.

WHAT ARE YOUR GREATEST LITERARY ASPIRATIONS? To be able to write full time and to turn my series into film.

WHAT ELSE HAVE YOU PUBLISHED?  I write a column for a national automotive magazine which allows me to incorporate my passion for writing with my family business.

DO YOU HAVE ANY NEW BOOKS IN THE WORKS? I do. I’m almost finished with Life Force Preserve; West End William (series book 2). I’m hoping to have the book out soon.

Email ThisBlogThis!Share to TwitterShare to FacebookShare to Pinterest
Labels: Award-winning book, Best books for YA audiences, Books about Aliens, Recommended YA books, Virus and connection to blood-type