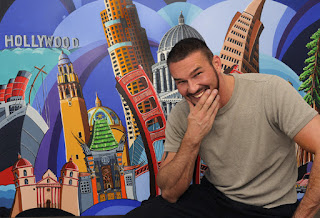 WHAT INSPIRED YOU TO BECOME A WRITER?
I am a painter and illustrator. In a painting you can only express a portion of a story while in a novel you can tell much more. This limitation led me to writing.

WAS THERE A TEACHER OR OTHER MENTOR WHO INFLUENCED YOUR WRITING?
In college I began taking picture book classes. I had a fantastic instructor, who believed that I was not only gifted enough to illustrate a book but that I could also write a book. After graduating with a BA in illustrations I took classes at the Institute of Children’s Literature for over ten years. There, I learned the foundations of children’s book writing. Along the way, I had some fantastic instructors who influenced me a lot.

HOW DID YOU GET THE IDEA FOR YOUR AWARD WINNING BOOK?
One day I was working on an illustration when I wondered how it would be if the painting came alive. This was the start of a picture book story called “Painting Brian.” Soon, I realized that the story was too complex to be told in a short story. I created an entire world inside a painting. This is how the Magora series, with six books, came about.

WHAT IS YOUR FAVORITE LINE FROM YOUR AWARD WINNING BOOK?
I use little epigraphs about art at the beginning of each chapter of the Magora books. The very first one is the start of the series and also my favorite: “The line between reality and fantasy has many shapes. It can be thick or thin, colorful or dull, wavy or straight, blurry or sharp. It is always changing.”

WHAT MESSAGE DO YOU HOPE READERS WILL GLEAN FROM YOUR AWARD WINNING BOOK?
The leading character, Holly, struggles with self-confidence. It takes a journey into the fantasy painting of Magora to make her believe in her artistic talent. Readers can learn from “The Gallery of Wonders” that they should trust in their talents. And if they work hard on them, like Holly does, they will come out on top.

TELL US SOMETHING ABOUT YOUR EXPERIENCE AS A WRITER:
When I created the different species in Magora in the 90s I was really proud that I came up with an interesting name for a fantasy species. The Ledesmas are humanoid beings who have butterflies in their heads instead of brains.

I was excited when I created the name “Ledesma” and thought it was very unique. A few years later I met a lady. After a few weeks I found out that her last name was “Ledesma” and that the name was a common last name. It was certainly not an amazing, unique fantasy name by an unpublished author.

IF YOU COULD BE COMPARED TO A WELL-KNOWN AUTHOR WHO WOULD YOU MOST WANT THIS TO BE AND WHY? I have always been fascinated by the creativity of Roald Dahl. He created unbelievable stories for children that still fascinate people today. He always surprises the reader and comes up with completely unexpected twists and turns.

WHAT HAS HAD THE GREATEST IMPACT ON YOUR LIFE?
As much as I would love to say that a book had its greatest impact on my life, I have to say that it was cancer. Having had cancer ten years ago made me aware that it is important to seize the day and accomplish something wonderful each day without looking at the financial benefits. A day full of boredom is a day lost.

HOW DID YOU FIND AN AGENT / GET PUBLISHED?
After twenty years of writing the six books in the Magora series, I wanted complete control of the layout, design, illustrations, and covers. A publisher usually doesn’t give an author this kind of freedom. As a painter/illustrator I didn’t want someone else to illustrate my covers. So I decided to self-publish the books under “Misty Moon Books.” This way, the paperbacks now look exactly the way I wanted them to be.

IF A CLOSE FRIEND OR LOVED ONE WANTED TO WRITE A BOOK, WHAT GREATEST PIECE OF ADVICE WOULD YOU GIVE THEM?
Take a course in writing and have your book edited by a professional structural editor. Many people think, because they are English teachers or have some friends who are good in English, they don’t need editors. But editors make books shine. I worked with about ten editors on the Magora series. Without them, the series would have never reached such a high level of sophistication.

WHAT HAS BEEN YOUR GREATEST LITERARY ACCOMPLISHMENT?
The completion of the Magora series. I have started writing the Magora series in the mid-90s and finished the series in 2016. Even though the first books seem to have a simple plot, the overall story is very complex. It reaches a metaphysical realm in the sixth book which no one can expect in the first three books. The planning of the series was very difficult, and it took me years. Having won over ten literary awards with this book has proven not only that it is my greatest literary accomplishment but that it is also appreciated by the world outside.

WHAT ARE YOUR GREATEST LITERARY ASPIRATIONS?
As a full-time painter it is always a struggle to pay the bills. Therefore, writing is always something that suffers. It would be wonderful to have a year without financial worries so I could focus more on writing. I would love to get to the point that I could make a living, writing books.

TELL US SOMETHING PEOPLE MAY NOT KNOW ABOUT YOU THAT THEY MIGHT FIND INTERESTING:
When I was a kid I had a chameleon as pet, and I created a dwarf species called Peenoo. As a teenager I played hide and seek in some ruins left from WWII. Later I lived in Tokyo and studied Japanese and Zen painting. During my college years in LA I was in a huge earthquake that left my apartment in ruin so I had to move. After college I spent a year in Honduras and was almost killed there by a stingray. I lived for a while with an Indian tribe in the Mosquito Coast. After my return to Europe, I visited almost every single country in Europe, except for seven in Eastern Europe. My family lives in three different countries: Germany, France, U.S.A., and I commute between them all the time now.

IS THERE ANYTHING ELSE YOU'D LIKE TO SHARE WITH OUR READERS?
I have worked on a soundtrack with a composer for the Magora series. And one of the fantasy characters, Tenshi, came to life with the help of a great animation team. The critter is waving at you and doing all kinds of things on my website www.Magora.net
WHAT OTHER BOOKS HAVE YOU PUBLISHED?
The Golden Maple Tree (Book 2, Magora Series)
The Bridge in the Fog (Book 3, Magora Series)
The Uprising (Book 4 , Magora Series)

DO YOU HAVE ANY NEW BOOKS IN THE WORKS?
Yes, I have a few books in the making. The next book in the Magora series is coming out in 2018.  I have also started a younger middle grade story with the working title “Henry’s Giant Chocolate Clouds.” It is about a fantasy candy land.

Another project is a young adult fantasy series called “Mystery Black” with trolls, dwarfs and all kinds of magical creatures.

I am also working on a German translation of “The Gallery of Wonders”, and hope to get that published soon.
The next book is a young adult book called “The Language Thieves.” It is about a mysterious tribe in Scotland that steals languages out of people’s minds.

The book is already completed and it has been edited a few times by various editors. I just need to find the time to illustrate the cover and do the layout.

Once it is done, you will find it on Amazon. But if you sign up to my newsletter you will always stay updated and find out the exact dates of publication.