Heaven Breaks In, by Nicholas Cappas, earns the Literary Classics Seal of Approval 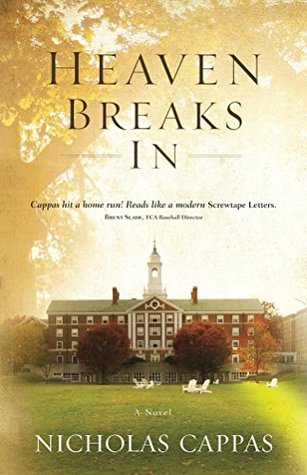 Heaven Breaks In is the story of Davis Chandler, a freshman going away for his first year of college.   Davis has always been firmly rooted in his faith.  But now that he is in a new environment the secular world and many seemingly innocuous moments threaten to weaken his resolve to remain strong in his faith.

But the spiritual warfare going on in Davis' life is deeper than one might see on the surface. Fighting on the frontlines are a team of angels assigned to help Davis maintain, despite the many obstacles in his path.  The Archangel Michael, and Littleton, the angel assigned to intercede on Davis' behalf, engage in a series of letters between each other as they strategize a series of plans to steer Davis in the right direction.

This thought provoking book  provides a unique perspective of another dimension in which angels and demons duke it out in a battle to win human souls.  Author Nicholas Cappas puts a modern spin on C.S. Lewis' The Screwtape Letters offering readers an introspective glimpse into the seductive ways in which secular influences can insidiously whittle away at the foundations of a person's faith.