The Gateway Chronicles, by K.B. Hoyle, earns the Literary Classics Seal of Approval 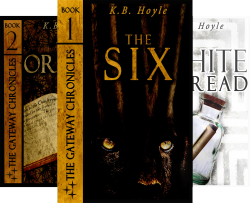 One day while hiking a young girl discovers a portal to another world, the magical land of Alithia.  She soon learns of a prophecy claiming that she and five others are destined to save this mystical place.  At first the six are unsure of their part in this ancient prophecy.  But eventually they learn to work together as a team, united in their efforts to fulfill their destiny and save this enchanted land.

Author K.B. Hoyle pens scenes that pop with vibrant details, making the world of Alitheia vivid and very much alive for the reader.  There are new and exciting twists with the turn of each page as this dynamic series unfolds. Hoyle is a gifted author whose stories flow smoothly from one exciting chapter to the next, leaving the reader heartily anticipating the next adventure.

The Gateway Chronicles are a phenomenal and entirely compelling series.  As the story progresses all the characters are fleshed out as each grows and develops in maturity.  The six encounter struggles to which we can all relate and from which we can all learn.   Each book in the series expertly builds upon the last. Hoyle guides her readers through a gauntlet of magic and fantasy adventure as the series builds to a resounding crescendo.  The world of fantasy fiction is brought to an entirely new level with this outstanding series.  The Gateway Chronicles are destined to become a timeless classic.