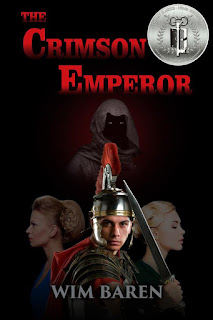 WHEN DID YOU FIRST KNOW YOU WANTED TO BE A WRITER AND WHY?
I retired in 2014 from teaching/consulting. I love history, and read about ancient Byzantium. Fascinating stuff! And it gave me ideas about a story set in just one of several really dynamic periods. (Honestly, you can't make this stuff up!) Went through all the angst a newbie to writing goes through. Persevered, persisted, sweated, and after a year out came the present story. I loved doing it so much I decided it’s what I will do until I’m carried out feet first.
​
WHAT OTHER BOOKS HAVE YOU PUBLISHED?
Two short stories - The Muse and Canary In The Mine. Also several short (2K words, and free!) broadsheets - Mozart's Brain, and Mozart's Brain, Too on creative writing, from my own experiences, all written in a breezy light-hearted style, all on Smashwords, accessible when the main book page is displayed. Enjoy!
​
TELL US SOMETHING ABOUT YOUR EXPERIENCE AS A WRITER
Writing a romance opened my emotional eyes wide. I had a scientific education and professional background, and saw the world in straight lines and black and white terms. This book experience has helped me come to grips with and express the fullest range of emotions, and has made me a lot more sensitive to others and the depths of their characters. This is something I draw on when I sit down to create a scene, an action, an event, and to people it with characters of my own creation.
​
WHICH AUTHOR HAS MOST GREATLY INFLUENCED YOUR WRITING STYLE?
H. Ryder Haggard’s She and Ayesha, and the Ring Cycle by Eric R. Eddison (The Worm Ouroboros, The Mezentian Gate, A Fish Dinner In Memison, Mistress of Mistresses). Their stories are magnificent, and the women are strongly depicted, deep, and of consummate beauty. Their writing styles are classic (Eddison) and skilfully colorful (Haggard), and their dialogue styles are quite simply majestic. They have written the kind of beauty I want to write.
​
WHAT BOOK HAS HAD THE GREATEST IMPACT ON YOUR LIFE?
Not to sound too corny or straight-laced, but the King James Bible. As a history it is marvelous. As a story of redemption, it is unparalleled. And as for its style of writing, few examples of greater majestic beauty exist, IMHO.
​
WHAT HAS BEEN YOUR GREATEST LITERARY ACCOMPLISHMENT?
Writing The Crimson Emperor, without question. Getting the Literary Classics award this year is the second greatest achievement. They have been tremendously inspirational for me, and I find myself frequently wanting to get back to my desk to set more fingers to keys (electronics today - technology, wow!).
​
CAN YOU DESCRIBE THE PROCESS OF BECOMING PUBLISHED AND ANY TIPS YOU MIGHT OFFER FOR OTHER ASPIRING AUTHORS?
I have self-published, but I would love to see my story in hardcover at some point. I learned I had to not just get the words out - that's the easy part - but then I had to edit, reframe, correct, modify, etc. - which is incredibly labor- and mind-intensive. It's like sculpting a huge block of marble - carving and chipping away everything that doesn’t look like what I want in my story. But you have to get the block out first, in order to shape it as you want. Then, and only then, can you send it out for self-publishing. Assume your reading audience is really, really picky. Because they are.
​
CAN YOU OFFER ANY ADVICE FOR WRITERS ON HOW BEST TO PROMOTE THEIR BOOK?
Enter competitions wherever you can. Get an award. Go with it out to everybody you know - they will network with others if they like what you've created. This can build a solid retinue of people who like your works. Also, get yourself a couple of books on how to market and promote your works. Smashwords is a good place to start. DON'T think you already know it all. I’ve proved I don't.
​
IS THERE ANYTHING ELSE YOU'D LIKE TO SHARE WITH OUR READERS?
Don't give up on your dream. Even if you are just starting and the end goal seems like it is on top of Mount Everest and you're at the bottom of the mountain - keep your eyes on the goal and don't sweat the small stuff. You will fail. You will fail many times. But in the end, you'll succeed.
​
DO YOU HAVE ANY NEW BOOKS IN THE WORKS?
I have three novels in various states of dress. Two are about Byzantium, before and after the period of The Crimson Emperor. The former is The Iron Courtesan, and the latter is tentatively named The Red and the Gold. I have another novel, a fantasy set some 8,000 years in the past, that arises from an exploration around ancient Carthage. They will also be self-published, probably on the same websites mentioned earlier. I hope to have at least one, and possibly two, completed and published during 2016. We’ll see…
​
​
​