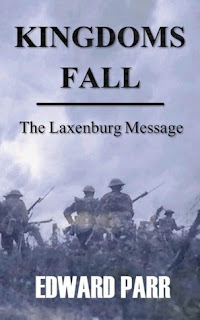 In Edward Parr's Kingdoms Fall, we are reminded that politics is a complex mixture of good and nefarious activities, and that war exists for many unique reasons.  Parr's story begins with the assassination of Archduke Ferdinand and continues through to 1918 with the armistice.   If classroom history could be this good History would be the most popular subject.  Romance, murder, intrigue, fear, and uncertainty are woven into this compelling novel which is a fascinating read for history buffs as well as those who may find the subject of history to be a bit tiresome. This novel incorporates the well known Lawrence of Arabia, as well as fictionalized characters such as OO6 of the British Secret Service. Specific battle plans are dissected and revealed so non-historians can grasp the intricacies involved in even the simplest military endeavors. War in all its horror and gore is described in such detail one can nearly smell the cordite and mustard gas.