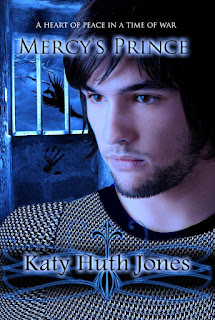 Well written and surprisingly believable for a work of fantasy, Mercy’s Prince is a highly engaging tale which is difficult to put down.  When a young prince groomed to be ruler is killed in battle his scholarly younger brother, Valerian,  must fill the role.  After he becomes the crowned prince Valerian befriends a peasant girl who is a healer; he soon learns he can communicate with her telepathically.  To save his people Valerian attempts the impossible as he elicits the help of dragons to help save mankind.

This novel is replete with tales of royalty, magic, dragons, love, adventure, and life-and-death struggles.  This exciting work of fantasy fiction is suspenseful and well written. Mercy’s Prince is an entertaining venture into another world, a time of mystery, a time long gone.

The exciting adventures within the pages of this book offer escape to another world and an alternate way of life. Katy Huth Jones keeps things interesting with continuous twists and well developed and refreshingly unexpected characters.