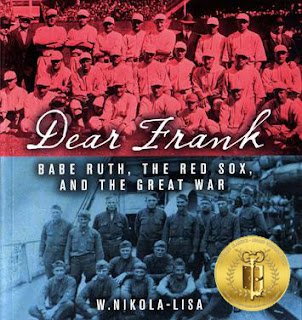 Dear Frank: Babe Ruth, The Red Sox, and the Great War is a work of fiction chronicled through a series of letters penned by a young boy to his big brother, Frank, during World War I.  This book relays the many hopes and dreams of Bostonians as seen through the eyes of a young boy.  The politics of war and baseball play a key role in this story, as does the touching sentiment of a brother and family who all greatly miss the presence of Frank  in their lives.  Gems of historical fact are interspersed throughout the book, making this a fascinating and enjoyable read.

W. Nikola-Lisa exhibits rare talent in this genuinely touching book about the bond between brothers, the hardships of war. . . and the joy of baseball.

Dear Frank: Babe Ruth, The Red Sox, and the Great War is a Seal of Approval Recipient and earned two Gold Awards in the 2013 Literary Classics International Book Awards.