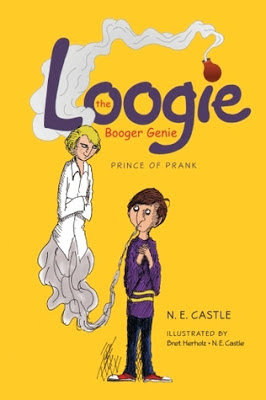 After pulling one too many pranks, young prince Loogar's father elicits the help of the wizard to put a stop to the boy's unwelcome shenanigans.  But when prince Loogar (or Loogie as his nanny calls him) tries to play a joke on the wizard, the wizard decides to put the arrogant young prince in his place once and for all.  Loogie is turned into a Genie only to be discovered hundreds of years later by a young boy, named Charlie, who shares Loogar's passion for playing pranks.  When Loogie becomes lodged in Charlie's nose, the two boys must work together to help break the wizard's spell and set Loogar free.

Loogie the Booger Genie, Prince of Prank is the first book in a series which is likely to be a big hit with young readers.  Author N.E. Castle has crafted a tale full of adventure and humor, laced with messages touching on compassion and character.  We highly recommend this book for young readers and we look forward to seeing future works by this promising author.